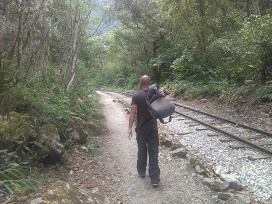 Machu Picchu can be an expensive pre-booked affair that leaves you feeling herded, harried and lost beneath a canopy of selfie-sticks, but it doesn’t have to. There is a better way—a hobo way. Here is how my friends and I went from Cusco to the top of Machu Picchu and back for about a $100 USD…beer not included.

We woke up at 4:30am on what might have been a Tuesday. Our hostel was situated in the upper corner of San Francisco Plaza and should have been dead quiet but the jackass volunteers were still awake and I shit you not listening to “Call Me Maybe” at a ludicrous volume. Already lightly packed for Machu Picchu we inhaled a quick breakfast and jumped into a cab. The internet had told us that the first bus was at 6am and that the ride to Santa Maria, the initial stop on our hobo journey, would take six hours.

For 10 soles we took a taxi to the Santiago Bus Terminal—a filthy little hole full of bleating vendors. Which is super fantastic because who doesn’t love multidirectional shouting at five in the morning. So the fucking internet (and yes I get the irony) lied. The first bus wasn’t until 7:30 am. We found a nearby hotel selling terrible coffee and a street stall selling palatable egg sandwiches and killed time (plus all the critters good and bad in our stomachs) for about 3 soles.

We had to leave as early as possible because our plan included a big bus, a little car and a two hour hike along the train tracks to our final destination of Machupicchu Pueblo (also known as Aguas Calientes.) For the first leg we chose the Ben Hur bus company because they had the earliest posted departure time and a 20 soles price tag. Unfortunately, they didn’t even come close to meeting that departure time. When the bus pulled out of the station an hour late we had already eaten all of our road snacks and were starting to worry about our timeline. So imagine our annoyance when the bus promptly pulled into a petrol station to fuel up…

On a clear day the drive from Cusco to Santa Maria is a beautiful winding path through the Andes. This was not a clear day. A couple of hours in we hit a nasty fog bank that transformed those lovely roads into a horror show of near head-on collisions and reversals away from the edge of oblivion. The movie selection that day was Rambo: First Blood Part I. Foggy cliffs outside, a cacophony of machine gun fire inside—rolling towards Machu Picchu in a tin-box of death. 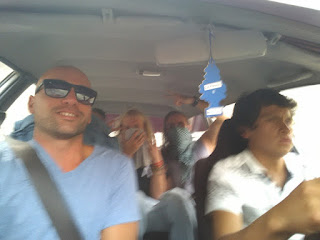 The skies cleared as we approached Santa Maria, but it was already 2:30pm and we still had a long way to go. We didn’t want to risk tip-toeing into Machupicchu Pueblo by the light of our headlamps, so we took a ride with the first hustler that approached us. He charged us 15 soles each to get to the Hydro Electric Station and the start of the railway path to Machupicchu Pueblo. We probably could have bartered but didn’t have the time. Our driver handled his beat-to-hell Subaru like tricked out rally car. He ripped across a gnarly road that jutted from the side of a cliff like a pouty lip deftly avoiding every pothole, stray rock and oncoming racer. With dust pluming and butts puckered we power slid into Santa Teresa and switched to a car driven by a fifteen year old kid with a penchant for terrible hip-hop. There was no extra charge for this transfer; the locals were just passing us off like Pony Express parcels. 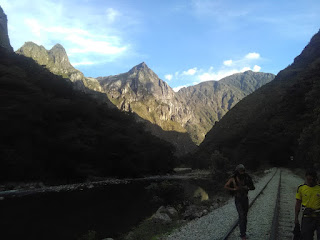 From the hydro electric station it is a two-hour (maximum) hike along the railroad tracks to Machupicchu Pueblo. The train is a funky retro looking thing that costs an absolutely dumb amount of money. If you have dumb money go for it, otherwise hobo like us. A walk along the railroad tracks probably sounds terrible but trust me the scenery is not the stuff of smoke stacks and dusty derelicts you are probably imagining. It is a beautiful jungle canopy with expansive river and mountain views—a serene and impressive path that just happens to have a train running through it. 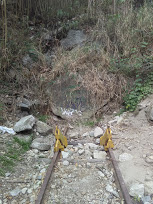 An important note: about 200 meters in the railroad tracks dead-end. On the right side you’ll see a path that leads up to a second set of tracks. The trail is no more than 50 meters. At the top hang a left and stroll straight to Machupicchu Pueblo.

It was past sunset and growing dark when we arrived. From a distance Machupicchu Pueblo is a fairytale like village nestled into a jungle valley, but as you approach its exploitative purposes become clear. Prepare to get hit by a tidal wave of ponchos and stuffed llamas. You can purchase Machu Picchu entrance tickets at the official agency near Plaza de Armas. They are open until 7pm if not later. Or you can purchase tickets ahead of time in Cusco if you’re into that sort of thing. There are several options, all of which are expensive. We opted for: Machu Picchu + Machu Picchu Mountain = 142 soles. We had wanted to do Machu Wayna Picchu as well but it was booked for the next three months!

All the cheap stuff is across the bridge from Plaza de Armas and there are more hostels than there are tourists to fill them so don’t worry about booking ahead of time. Unless you’re into that sort of thing. We found a decent joint for 25 soles per night and went out looking for dinner. The food in Machupicchu Pueblo varies from reasonable to wildly overpriced. One thing to be wary of: some restaurants will charge a “Local Tax” or “Service Tax.” This is total bullshit and you don’t have to pay it. Ask ahead of time and if they sneak it in refuse. Also, don’t order Mexican food. TA-RUST ME.

Machu Picchu opens at 6:30am and the mountain opens at 7am. The “hike” up takes an hour (or less) depending on your fitness level. We got up before dawn and found a buffet restaurant for 15 soles. After packing in mucho calories we made sandwiches and snuck them into our bags for later. Hobo style!

Here is a true thing: people are lazy. As we headed toward the trail we saw no less than five hundred people lined-up to take the carousel ride of buses to the top; people decked out in full-on hiking gear, headbands, walking sticks, the works. Take the freaking stairs you over-geared sloths! Seriously, if you call yourself a backpacker and take the bus, I will pull your card.

When I say “we” I mean, myself, Rhys, Tim and Josh. The boys and I had been traveling together for more than a month and on several occasions had said, “No matter what we have to stay together until Machu Picchu.” Sadly, we took “until” quite literally and got split up ten minutes after entering the park. Josh and I turned right toward Machu Picchu Mountain, Tim and Rhys wandered past toward the Sun Gate and we didn’t see each other again until near sunset at the hostel. PRESET A MEETING PLACE AND TIME. It is easy to get separated in the crowds and near impossible to reunite. 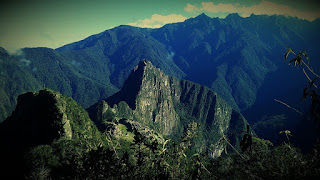 Machu Picchu Mountain was quite possibly the highlight of my day. The hike up is strenuous and there is no bus. Josh and I were the first ones to the top and for a few glorious minutes we had the mountain to ourselves. The views are amazing. You have a 360 degree panorama of the cloud shrouded valley and from that height it becomes clear just how well the mountains hide the ancient city. That spectacular vantage point will erase any doubts you had about how Machu Picchu remained unconquered.

You can’t wander around Machu Picchu. There is a one-way path and whistle blowing guards to enforce it. This was a bit of a disappointment as we had imagined exploring the ruins with the sporadic joy of hide-and-seek. Still, the city does not disappoint. You will have a hard time choosing between actual pictures and the mental pictures you badly want to burn into permanence. Bring a book, music, whatever helps you chill. Pack a picnic. There are several grassy rest areas that overlook the ruins and you will have ample time to sit back and absorb Machu Picchu and the fact that you’re seeing it with your own eyes. 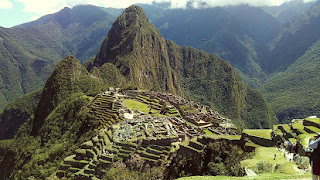 Something to consider: the vast majority of people try to enter the park first thing in the morning, but it is open until 6pm and by early afternoon the crowds dwindle down to a few wanders. You may have to battle the midday sun, but a quiet afternoon without the crowds should more than justify the sweat sheen.

And this is how budgets go BOOM! Reunited we found a second story pizza place that overlooked the local soccer pitch. We ordered small beers (or thought we did) and the staff brought out 1-liter behemoths. As local dudes booted a neon ball to-and-fro we spiraled down a deep dark hole—4:30am and a forgotten jacket deep—rookies on “vacation” deep.

Rhys had broken his budget to buy the forgotten jacket, and only days before, so leaving it behind wasn’t an option. The club wasn’t due to open until 8pm and apparently only the police had the owner’s phone number, so we found ourselves trying to explain to the chief of the Machupicchu Pueblo police that we needed to recover a jacket, not because of a crime, but because we were idiots. The chief sent a pair of adorable lady cops to help us sort out the situation. I am not being sexist; they were honestly adorable and really nice. So anyway, after shouting up at the club owner’s apartment and getting zero help from his twelve year old neighbor, they suggested that we throw rocks at the window. No! No way! The lady cops shrugged off our vehement refusal and daintily tossed pebbles until the red-eyed owner emerged. He was none too pleased but Rhys had his jacket and we were on our way.

The adventure was over and all that remained was the chore of getting back. If like us you find yourself at less than 100%, I suggest you crank up a classic rock playlist, tuck your phone into the waistband of your pants with the speaker facing out and Carry on my Wayward Son.

We reached the Hydro Electric Station at around 1pm where dozens of cars and minivans were waiting to ferry away weary travelers. We could have backtracked the way we came but a minivan was only 40 soles (5 soles more than we would have paid for the taxi/big bus combo) and so away we went. Six hours passed on bumpy roads and the driver left us at door of our hostel; food was a priority, then a shower and finally sweet sleep—the memories could wait until tomorrow.

A quick review for you planner types: 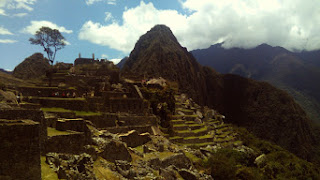 I intentionally left out the names of hostels and restaurants because they didn’t merit mentioning, but if you have any specific questions about food, lodging, etc, I would be more than happy to help. OR just show up and wing it. In my opinion that is when the best adventures happen.