Pants Are Not Important

I’m on a sleeper bus from Manila to Banaue. It’s cold as fuck in here. I’m wearing a hoodie cinched up tight and I shut off the air vents but neither effort made any difference. I’m not wearing pants. I’m wearing shorts and flip-flops because I’m from California and weather doesn’t change in my world. I hear coughing. I hear sniffling. I’m probably gonna get sick. I need this sleeping pill to kick-in so I can forget about my frozen balls. Maybe I should have worn pants?

When I was fourteen or fifteen I decided that I wanted to own a small resort on a tropical island and be an everyman about the place. I would tend bar and tell jokes and teach people how to wakeboard (because I was into that at the time). It would be a place that I was intensely proud of because every stitch of it was mine. When I was sixteen I found French Polynesia on a map, remembered that my Uncle Mike had said it was prettier than Hawaii, and decided then and there that Bora Bora would be my destination. I started studying French and the ins and outs of local government. Everyone thought I was crazy—a kid throwing himself into a dream that he’d never remember having. But I did remember. And as my adventures abroad grew longer people thought about that crazy kid, and his far out dream didn’t seem so far out anymore. 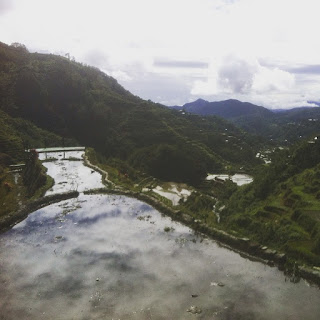 I am at the top of a lush valley looking down. The hillsides have been carved into intricate rice terraces like an MC Escher sketch brought to life and grown green. Amazingly this valley has remained unchanged for 2000 years. Long before the Spanish or the Americans set their colonial boots in the Philippines the Ifugao people had created their master work. The terraces were about more than agriculture and trade they were the magnetic center of a proud people. In many ways that is still true today. The business of tourism has arrived but in an unpracticed way. The region is remote and it caters to outsiders with ramshackle newness. It took me more than two hours to hike up to this point. I’m tired. More tired than I should be. This is what I came to see but I’m not in the groove yet. I’m still in task mode; hike, take pictures, check check. It always takes time to adjust, to stop carving your name and moving on, to allow new places to color you.

I saw my former business as close enough to a dream come true and figured that over time I could learn to love it just the same. And it was awfully pretty. It had that gorgeous island location. The guests were happy and they laughed at my jokes. I had time to myself in the mornings before work. I didn’t have time to travel but that would come. It was a nice approximation. But, it was missing me. It wasn't my dream.

I’m wrapped in a blanket that looks like cowhide but isn’t as warm. I’m peeing. This is like the fifth time I’ve gotten up to pee tonight. Something is wrong. My body is rebelling. My forehead is hot and my feet are cold. I keep drinking water but the dry spot in my throat won’t absorb it. I’m turning door knobs now. I need an extra blanket and I’m alone in this place, locked in behind metal gates. This wasn’t supposed to happen yet. Every trip has bad days, but they were supposed to be weeks away. They were supposed to wait until I’m in deep and less likely to give a shit.

It’s not easy to share a dream. I’m not sure it should be done unless the dream was mutual from the start. I bought an approximation of my own dream. He sold a piece of the real the thing. Those are uneven portions and volatile ones at that. We have different perspectives on why and how the partnership ended, but I think it can be summed up fairly by saying; he needed me to be more like him and I needed him to be more like me. It ended, and that sucks, but I understand why. Aesthetically it was close, but my soul was never in those walls. 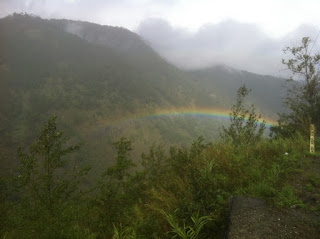 I’m in Sagada now, high up in the mountains of Northern Luzon. This place is seriously beautiful and has a great eco-friendly hippy vibe to it. I’m sure I’d be swimming in it if I didn’t feel like soupy dog shit. Yesterday I spent all day in bed. If I wanted to stand up I had to think about it for like ten minutes because I knew it was going to hurt that bad. I thought I felt a little better this morning. There is a bowl of yogurt in front of me, I can’t eat it. There is a cup of coffee in front of me, I can’t drink it. A few minutes ago I got so nauseous I blacked out for a second and came back covered in sweat. Is that bad?

Things end. Emotions burn off. And what remains looks pretty good actually. I’m better off financially than I was going in, I learned a few things about a business that has always interested me. And I got to live in paradise while doing it. I am a blue-eyed white boy from America with a college education, an interesting resume and enough money in the bank that I don’t have to work for awhile if I don’t want to. As far as the great big world is concerned that is hitting the lottery. What would you do if you had a little money and nothing but time? We are about to find out how I would answer that question. 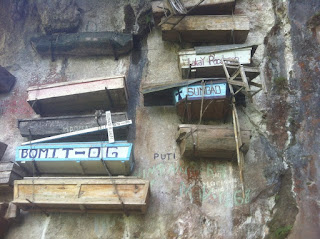 The weird blackout sweat thing seemed to break my cold. I’m standing in front of the hanging coffins of Echo Valley. They are ok. Maybe my expectations were too high, but I don’t think so. I think it is one of those places that photographs well but feels like a teaser for tourists, like you’re being led through the gift shop instead of the real thing. Still it is an interesting tradition that dates back to the pre-missionary animist days. Sagada is predominately Anglican now and to get to the hanging coffins you have to walk through a church cemetery, but the local people maintain the right to be laid to rest in the old way. For the ritual the body is wrapped in death cloth and placed on a chair beside the hanging coffin. The family sits vigil and when they are ready the body is enclosed in its cliff side resting place. The decision to be buried in the old way is generally made long before death so most of the coffins were shaped and built by the people now resting within them.

Nothing but time and I can go anywhere. I spread out the map and waited for a region to pull me on a string, to fasten my heart like a runaway balloon. Central and South America; no other region came close. That part of the world has been a gaping hole on my travel resume, but I didn’t want pop-in for a couple weeks and pretend like I’d been there. I wanted to take my time, roll-around in it, disappear and reappear. And now I can do just that. The plan is to fly into Mexico City and travel south for as long as the travel cash lasts. And I want this trip to be different. I want to dig deeper than usual. Again I’ve got time. I’m projecting four months but maybe it’ll be six months or a year. I don’t know. I will definitely learn Spanish. I might stop and teach for awhile. I might enroll at a University and study. I might do volunteer work. I might find the perfect place to build the resort I've been dreaming about since I was a kid. I don’t know if this path will be better than the last, but maybe. And I can work with maybe. I can throw gas on maybe. 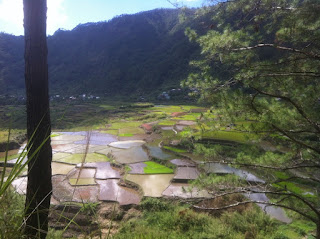 I slept hard and my cold is gone. I feel great. I’m on a bus. Again. This one looks like an old can of peas with glued on wheels. I’m traveling from Sagada to Baguio where I will catch yet another bus to a surf town called La Union. I was going to spend this trip focusing on productive type things, but I can’t. This is one of the most beautiful roads I have ever seen. It’s a winding nasty bit of business running along the ridgeline of a mountain range. There are sparse pine trees shooting up alongside the road and it could almost be the mountains of California if not for the terraced rice fields etching the valley below. I’ve been staring out the window for hours and the beauty won’t stop, it’s around every corner and down the center of every valley. I’m happy to watch, my mind is a clean and empty room. I’m in the travel groove. It took a couple of days to beat the sick and the gloom but I’m me again. I’m better than me. I’m me + traveling. The travel groove. The life groove.

This has never been a travel blog to me. It is an art project six years in the making. When I started MB Abroad I was very uncomfortable calling myself a writer or being called a writer by others. That has changed. I’ve realized that being a writer is more than the words you put on a page, it’s a born with it lens that defines how you interact with the world. I think in narrative. I speak in dialog. Look at my life; I clearly think that I’m a character in an unfinished adventure novel. And for the first time I’m cool with that. As you read through this entry you may have thought, “He just lost his business. Where are the punches? Where is the anger? He couldn’t have let it go already.” But, I have. The future I knew went POOF and one voice was louder than them all. It built and built and BOOMED; PLOT TWIST!!

I’m sitting on a porch outside my room. There are stars in the sky but the night is still deepest black. I can hear the ocean but I can’t see it. It is calling to me as it always does; singing about faraway places, promising that everything is going to be ok. But, I already knew that. I’m in the groove. I’m ready.

To never look back, wondering if I should have worn pants.

Posted by MBabroad at 7:17 PM No comments: