I am walking up the street, across uneven pavement, dragging all my worldly belongings behind me. I haven’t slept in two days save a few fitful hours on a metal bench in the Bahrain airport. I feel drugged; stoned on anticipation with the coming crash pulling down.

I lift my bag up the green steps of the Taco Shack—my Taco Shack. Khai sees me and says, “You’re a sight for sore eyes.” There is an edge to his words. There has been an edge to all our communications recently. What he really means is, “It’s about fucking time.”

The ballooning of our business happened because Imagine if came true.

Last summer we were sitting on the old Taco Shack patio; scheming. The place across the street had a spacious garden patio on a corner lot. Its potential was obvious, its waste shameful. “Imagine what we could do with that...”

My imagine was a few years off. Khai’s imagine, as always, was now.

At the time I couldn’t put any immediacy to Taco Shack plans because I still had Saudi Arabia to deal with. My investment money was out there in the desert, an inescapable trial. And what a bizarre trial it turned out to be.

I am in a desolate train station. The air is hot and heavy with dust and sand. I shift my weight knowing that it won’t bring comfort. The train is late and getting later. With every second that passes my worry increases. What if it doesn’t come at all? This train is special. It leads to a better life—a dream life. There are people in the station with me, good people, friends. I try to keep up with conversations and engage in their train station world, but my mind is fixed on those rails and the promise of where they lead. My friends aren’t going with me and I don’t want them to take my happiness personally, so I do my best to internalize hope, anxiety and the need to talk it out. The clock hand falls with an exhausted thump. Where is that goddamn train?

For nine months the Taco Shack both fueled me and burned me out. There was a brief time midway through when I thought things were going to get easier. I was fully invested in the business and looking forward to saving up for future expansion. Then I got the email.

The place across the street with the patio and all that potential, our Imagine If, was available and an offer was on the table. It meant doubling my original investment and arriving in debt to the business. It meant that all the renovation would be done while I was still in Saudi unable to put my own stamp on my own future. I whispered caution while Khai bellowed, “Now!” I knew he was right. I wanted to bellow too. But…

It was so much money.

And I was so far away.

There is a joystick to my seemingly unpredictable life and it is always in my hands. I control the action. I move me. When we agreed to lease terms and began the expansion I handed the joystick to Khai. It wasn’t a happy choice. Logically I understood that the expansion needed to happen now. We couldn’t sit on that sizeable rent payment simply because I wanted to play architect too. But, the expansion was my chance to put a physical presence to our partnership. I had been telling people that I owned a hostel in Thailand, to see how it felt, to test its realness. No matter how many times I repeated it, it always felt like a loose tooth, wiggly and worrisome. I had invested everything, but that wasn’t enough. I needed some level of physical control in order to make owner feel real.

I played until it hurt. And then I played some more.

I fall into bed. My feet are throbbing. I’ve worked fifteen hour days for more than a month and I’m still not used to the pace. Construction during the day; the waiter-busboy- bartender-receptionist shuffle at night—I feel ripped inside-out and hung out to dry. I lie on sandy sheets, staring into the dark, starving. I was too tired to stop at 7-11. I regret that now.

I crawl across the bed and open the mini-fridge. I feel around for the apples I’d nearly forgotten. I gnaw at the first like a horse being fed a sweet treat. I savor three more. I put the cores in a plastic bag and tie it up. The garbage can is across the room. I am not getting out of bed. I refuse. I slide the screen back and drop the apples outside. Sleep shuts me down. This is not rest; this is the machine repairing itself.

That’s how it was for what felt like a very long time. And then it all slowed down. In retrospect the slowdown was gradual, the predictable result of hiring a proper staff, gaining a new partner and practice. But, it didn’t feel gradual. One day I was sprinting, my heart hitting my sternum like hammer to gong, the next I was strutting, slightly bewildered by my sudden ease.

Our new partner’s name is Julie. Although she is new to you, she is not new to the story.

Michael came to Koh Tao to visit his buddy Khai and see what was up with the hostel/taco joint he had seen on Facebook. Over the years they had both taken (sort of ) similar paths; stints teaching English, lots of backpacking and a magnetic pull towards Thailand. The visit wasn’t supposed to be anything major; a few nights and moving on. But Michael loved the hostel and listened intently to Khai’s ideas about the future and his need for the right kind of help. They shook hands and Taco Shack became a partnership.

But that is not where the story began.

On his first trip to Thailand Khai met Julie. She invited him to Koh Tao, a place he had never heard of. They became great friends and years later when Khai decided to start a business he could think of no better place than the island Julie had shown him. His business flourished and he needed to find it a more permanent home. Coincidently, Julie was looking to close her shop in Mae Haad. Her shop became his restaurant and six months later Khai opened a hostel upstairs. He wanted more but he needed help. Julie was firmly entrenched in her family’s business and couldn’t be the partner he needed. Then fate showed up in the form of an old friend.

Michael came to Koh Tao to visit his buddy Khai... Etc Etc. A handshake. A partnership.

Imagine if came true! The business quadrupled in size and plans for the future were anything but small. Michael and Khai needed a third partner. Fate it seems was still hanging around. Julie became quite suddenly unentrenched from her family’s business. She waivered at first but the pull of potential was just too strong. The Taco Shack became a triumvirate!

In truth I don’t believe in fate. I believe that you make connections, pay attention and seize opportunities. But, I’m also a storyteller and the whole Khai wouldn’t be here without Julie, Michael wouldn’t be here without Khai, all for one and one for all, Taco Shack for life! narrative is easy to romanticize. And why not? We work well together. We’ve never had a discussion about defined roles because we’ve never had to. I’m not trying to paint over reality with a fairytale gloss, there are things, there are moments, but we have harmony and it shows. In a recent review we were described as being “like a little family.” That is tears to the eye stuff. I love that.
I was spinning. I was wobbling. And now I can see. Things at the Taco Shack are humming along. I’ve swung a hammer and I’ve gotten dirty. Owner no longer feels wiggly and worrisome. The three of us are working well together and enjoying the free time our triumvirate provides. Those extra hours have made me realize that while I’ve been occupying space on Koh Tao, I haven’t really been living here. I need to get a life. I need to enjoy the spoils of the island, get myself a good group of friends, read, write and learn. I need to revel. And I need to whoop.


Those things will come. I just need to have the patience to absorb. And when I’ve done that, I’ll find something else to chase, it’s who I am. But I will be as close to content as I ever want to be. It will be my version of perfect; no longer spinning, no longer wobbling, picking up speed—reveling and whooping in that syncopated burst that comes in the rattle before repose. 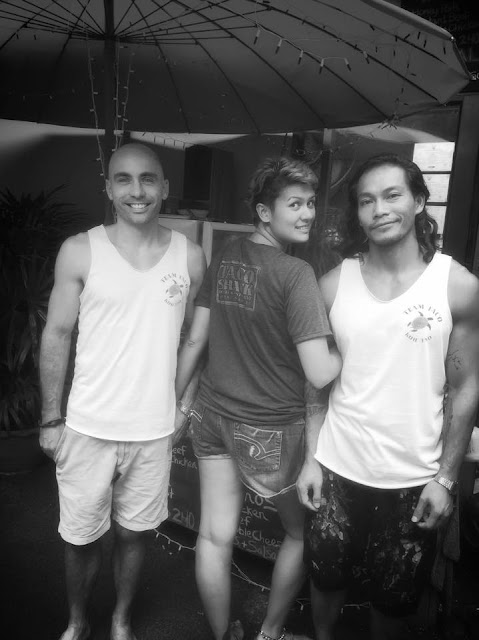