So Far in Saudi Arabia

I got on a plane and disappeared into the Middle East. Since then I haven't said a word. I'm sorry about that.

It's been a busy few weeks--an adjustment heavy few weeks. It's early on Friday morning here, 6:30am, the start of my weekend. For the first time since I arrived I have nothing to do--a day to myself. I've had my coffee and had my toast. It's time to reflect. I'm way past due.

So far I am happy with my decision to come here...

So far I am happy with the people, inside the expat community and out...

I say so far because so far I have been protected. Shabaka Prep, my new employers, know that this can be a difficult place. They've seen the looks you gave me before I left America, the doubt, the unshakable concern, He's smart. I should trust him. But why is he doing this?

Shabaka has done everything possible to neutralize that concern. I have been given a furnished apartment on a compound with a pool and a fully equipped rec room. I am taken to school and the mall and the grocery store by bus. If I was less curious I could skim across the Kingdom of Saudi Arabia without ever really seeing it--teach English to a room full of kids in costume and nine-months later fly fly away.

But I am curious. And I am ready to be less protected. In order to tell you "why" I have to trust my curiosity. I have to let it illuminate the streets and souks. I have to let it illuminate the people. If I do that I will begin to understand. I want to give you access to everything; the colors bright and dull, the sounds of prayer, the smells of frankincense and spice. I want to learn truths about this place and I want to pass those truths on to you. I want to answer why in great detail. I want you to see. 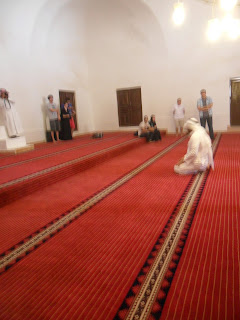 I arrived with a few irrational concerns, nothing too heavy or sticky, annoying flies that needed to be swatted away. For the most part they centered around Islam and the need to step lightly. There are five daily prayers; Fajr (pre-dawn), Dhuhr (midday), Asr (afternoon), Maghrib (sunset), Isha'a (night). When the call to prayer comes Mosques blare the message through speakers mounted to their exterior. An entire swath of the planet vibrates with a haunting and beautiful reverence.


I'm an atheist and occasionally a dumbass. I didn't know what I was supposed to do when the call to prayer began. How wide of a berth was I supposed to give? What if I was outside? Was I supposed to dive behind a date palm and wait it out? I knew these were nonsense thoughts the moment they hit my brain, but hit my brain they did. It is easy to over-think a place before you've been. And the only way I know to rein that in is to show up and see what happens.

The first time I got caught outside (so to speak) I was at a mall. Ironically I was sitting on a bench beside a plastic date palm. I was checking my grocery list before I went into the market. The call began and my butt puckered just a bit. I looked around like, Oh shit the net's about to drop! I shook off the stupid and began to enjoy the beauty of a new experience. All around me metal gates descended over store fronts; Cartier, Sephora, McDonalds, Victoria Secret; Western edifices momentarily dimmed in honor of Eastern ways.

The woman beside me was wrapped in black. Only her eyes were revealed. She was wearing an abaya. All women, Saudi and expat alike have to wear an abaya in public. The call to prayer echoed down the mall corridors and the woman dropped her head, I assumed in observance. I looked away embarrassed. And then I saw the electronic glow. She was on her iPhone, scrolling and tapping. She had an H&M bag between her feet. She was waiting just like me. Respect and concern are different reactions. I had a foot in both. Her iPhone reminded me where to stand.

The city I live in is called, Hofuf. Its dusty and sandy and full of trash. There is a large souk (outdoor market) in the city center, and date palm farms here and there. It has a look of desolation from what I've seen, but to be fair I haven't seen much. It's been too damn hot; over 130 degrees at times. The one time I did venture into that surface of Venus bullshit I almost died. I went looking for a barber when the sun was center sky and extra mean. Yes, I am aware how dumb that was. I got lost. My sunglasses practically melted onto my face and my watch literally, literally burned my skin. I didn't have any water and couldn't find any to buy. I seriously considered huddling in the shade like a mangy dog until night fell. I never did find a barber.

Side note: On a later night expedition I found a great barber. The haircut cost me $3. The barber was from Pakistan. His buddy was hanging out on the couch watching TV, switching between Indian music videos and WWE wrestling. I'm pretty sure the only thing he knew how to say in English was, "John Cena!" 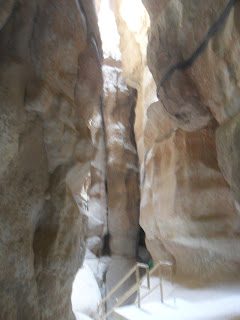 Part of my orientation for Shabaka included a "Discover Al-Ahsa" excursion. Hofuf is part of the Al-Ahsa region. Al-Ahsa is an oasis in the Eastern part of the Arabian peninsula with a history dating back thousands of years. Many Saudis consider it the best region of the country to work and live. The holy cities of Mecca and Madinah hold much greater spiritual and cultural significance, but in terms of lifestyle and overall tolerance Al-Ahsa is the place. The returning teachers warned us that the excursion would be a total suckfest, but that wasn't the case. It was sugarcoated for sure; drive past the scars and point out the shiny stuff. But it was educational too. And it was great to see what my new home had to offer outside of the bus route to school.

Environmentalism hasn't found its way to Arabia. The roads are strewn with litter. Last week I posed this question to my students, "If you drive through town what is one thing that you'll see EVERYWHERE?" Their hands shot up and they correctly answered: garbage. The awareness is there, the solution is not. And it may be a long time coming. I asked them to design a new product using recycled materials. Musaad and Abdul-Rahman told me they wanted to make notebooks.

"We will go to the jungle and cut down trees," they said.

The weather is changing. The mornings are starting to feel cool and the evenings pleasantly warm. The heat induced lethargy is fading away and with it contentment is flourishing. I am finally settled. I am finally ready to sink into the routine of teaching, writing and travel I imagined when I took this job. And I am not alone. The people I've met here all have stories remarkably similar to my own. We are all penniless vagabonds who came here to save money and extend the ride. We desperately need that first paycheck and yet we are already planning how to spend it. We have a ten day break in October. We are going rent a car, two cars actually, and road trip through Saudi Arabia into the United Arab Emirates and down to Oman.

We may have our faults, but we know who we are--a bunch of damn travel junkies in need of an Arabian fix. 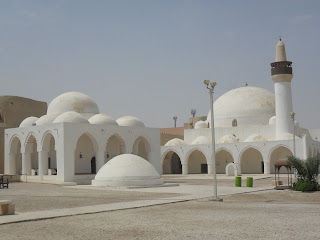 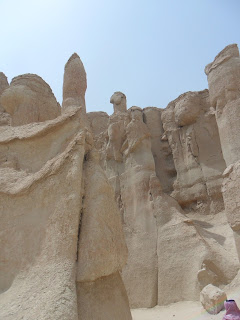 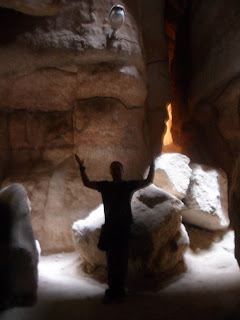