The golden coin was shiny once. It is tarnished now; worn down and dirtied up by thousands of fingers rolling it around in thousands of pockets. On one side is the great King Wenceslas astride his horse. On the opposite side a dragon roaring into battle. The coin is worth 20 koruna, less than one-dollar, but it looks like an old thing worth so much more.

With a flick I send the coin spinning in a golden spherical blur. I flicked it harder than I intended. It is moving faster than I wanted. My eyes grow huge and my breath grows short as the coin careens toward the edge of the table. Then, impossibly, it halts its forward charge and spins in place. The spins become wobbles—lazy arcs gaining in clarity until Wenceslas and the dragon are once again visible. It falls and settles with a tambourine rattle—a rapid expenditure of dying energy that shifts the coin a click too far. It tumbles from view, over the edge. My head sinks and my roommates roar. “Mr. Jilek,” they shout with trailing laughter. This is the name of our game. The game I just lost.

I down my beer. It is full. This is not the first beer I’ve downed tonight. I am having an amazing time, but I curse myself just the same because I am convinced that this is the drink that will carry over. This is the one that will that whisper in my ear come morning, telling me to eat everything and do nothing.

I wake up with cautious optimism. I feel fine. Great actually. I wonder if it’s a gift from the gods or a sign that alcohol is still lurking in my system, waiting to sucker punch me before it burns away. My roommate Chris knocks on my door and asks if I want to get breakfast at Bohemia Bagel. “Absolutely,” I say.

If it is alcohol creeping around I will wrap his smug face in bacon. I will drown him in hot black coffee. I will suffocate him beneath maple syrup drenched pancakes. Because, even Czech beer is powerless against the might of American pancakes. 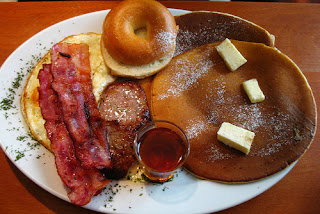 The breakfast is all that I had hoped it would be; two fried eggs, sausage, bacon (cooked to perfection), two massive pancakes lathered in butter and syrup and a bottomless mug of fresh brewed coffee. I add jalapenos to my eggs. I have always liked spicy food, but after living in Thailand it has become a necessary element, like a table without cutlery I don’t know how to begin without it.

Satiated and feeling triumphant about the caloric Shock & Awe campaign we ran against our hangovers, my roommates and I decide to walk around Old Town Square which has recently been transformed into a winter wonderland. Little wooden booths with red metal roofs and white Christmas lights fill the square. At the front of the square, near the Tyn Church stands a fully decorated tree fifty feet high. It is cold out, technically freezing. The square is packed with people and everyone is bundled-up in winter gear; little kids in trendy snowboarding outfits, adults in fashionable jackets and the older generation still wearing throwback furs and Russian style winter caps. The smell of food and warm drinks wafts from the vendor booths. There is no plastic to be found among the trinkets and gifts, everything is handmade, Bohemian, wonderful. Best of all the skies are blue—a bright creamy reach into forever blue. It is the first time we have seen anything but low gray murk for weeks. The height and curve of the sky makes us happy.
Prague in winter. Wow. Maybe a person can get used to this kind of thing, but I just don’t see how. It’s magic. I don’t care if they use the same booths every year or if the Trdelnik (Czech dessert) is overpriced. I don’t care if it is more about tourism than it is about the Christmas spirit. Consider me fooled. Call me a fool. I love it. I told you before that Prague has her rhythm. And when Christmas comes and she gets all dolled-up and sets to tuning, my god…

Hot spiced wine. This delicious mixture is everywhere in winter. It warms the hands and warms the belly. Despite the fact we only recently vanquished our hangovers via pancake no one balks when the first salvo of, “Hot wine?” is thrown into the chilly air. We walk around Old Town Square sipping wine and occasionally stopping in patches of sun. Our conversations are simple. Each of us is overwhelmed by the perfection of the day. With each move-and-stop we repeat our own sentiments of, happy, beautiful, we live in Europe! There is nothing more important to say.

We leave Old Town and walk to the Charles Bridge. There are so many people it is difficult to see the painters and musicians lining the sides, shilling for change. The cold is starting to sink in. I rub my hands together despite the fact that I am wearing gloves. 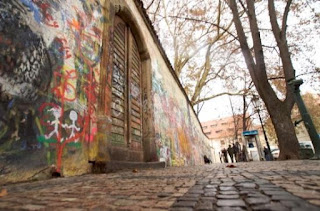 At the far end of the bridge, just before the fairytale climb to St. Nicolas church and Prague Castle we descend a set of stairs and weave through narrow cobble stone streets until we reach the Lennon Wall. Although images of the Beatles icon can be found on the wall it is not a tribute to the band, it is a lasting memory of peace. During the communist era family members would leave secret messages for each other on the wall. The Beatles never played the Czech Republic, but from what little information they had of the West, the Czech people knew that Lennon was a man who stood for peace and for that reason alone they nicknamed their wall full of secrets in his honor. 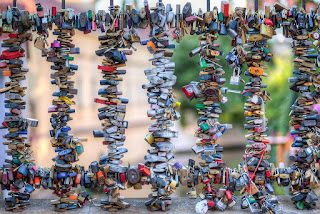 We stop at a stall near the love-locks bridge to order more hot wine. The girl working behind the counter is cute and she speaks English so we linger asking her silly questions. My favorite bookstore Shakespeare and Sons is just around the corner so we pop in to warm up and browse the shelves. I make an off-handed comment about how everyone seems to love “The Alchemist” by Paulo Coelho, but I think it sucks. From behind me a woman chimes in “Who loves that book?” We get to talking about the book’s shortcomings which leads to other things. She is American. She is married to the owner of the bookstore and has lived in Prague for years. She seems really happy. Living in Prague and working in a great bookstore at the foot of the Charles Bridge…I suppose she would be.

My roommate Sarah tells us about a pear concoction she tried when her sister was in town. She swears by it so we cross the river in search of it. We find the place and it’s great. It is an outdoor bar on the banks of the Vltava River. There is no inside, just a set of stairs that descend to a dirty bathroom. We order pear brandy mixed with hot pear juice served in white Styrofoam cups. We lean against the railing looking across the river at Prague Castle and the red tiled roofs of Mala Strana. There is a small park with a dirt path behind us. Couples, friends and tourists brave the coldness of standing still to appreciate the view. Frank Sinatra is playing softly from the speakers atop the bar. Beside us a man and his son are throwing chunks of bread out over the river. Dozens of seagulls swoop and hover hungry for the bread. They are uncharacteristically silent and unusually beautiful. They speed and slow to catch the bread mid-flight. We watch with wonder, we listen to Frank, we sip warm pear brandy and we know that this is yet another flickering moment that can only be understood by living it.

We leave to buy groceries for dinner. We will end our day the way we started—with a meal. We will return to Zizkov and the place we call home, as roommates, as friends, as people from different parts of the world lucky enough to live in Prague on a day full of blue skies and bread birds. 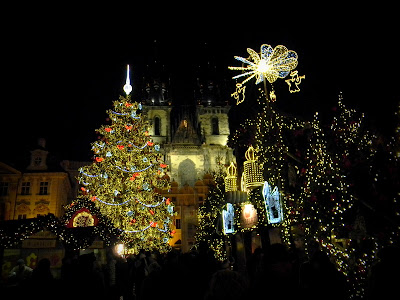 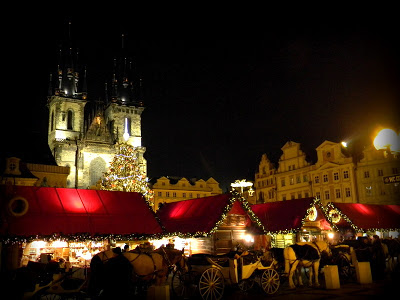