Portrait of an Imitation Artist as a Sort of Young Man

I stayed in last night. Young Kevin and I both agreed that we wanted to save money. Having settled on a mellow night we promptly went to the store and spent a king’s wage on all the fixings for an epic burger session. I mixed barbeque sauce, fresh chilies, garlic and red onions into the meat. Kevin fried them up. I lathered stone ground mustard and guacamole on a freshly toasted roll, placed the burger on the mustard side and topped it with Edam cheese, tomato and arugula. Kevin did the same. We each ate two of these beasts along with a mountain of chips and salsa. Adding to the gluttony I washed it all down with Cabernet. We don’t have a corkscrew so I tried to pull the cork with a steak knife. It didn’t work. I pushed the cork straight into the bottle spraying my face and the cabinets with purple nectar. Under the circumstances I had no choice but to drink the whole bottle. Oops.

I went to bed before midnight, a rarity for a Friday. The weeks have been flying by and I haven’t been spending enough time on creative things so I wanted Saturday to be a good day. I woke up feeling great. Well mostly great. The aforementioned burgers created a gaseous cloud around me that required not only getting out of bed but also a lengthy shower. 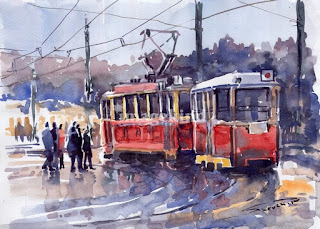 I took all of my school folders out of my sexually ambiguous euro-man-bag and replaced them with my computer, reading glasses and a novel, “Ham on Rye” by Charles Bukowski. I knew I would feel pent-up if I stayed in my room all morning so I decided to check out the Globe Café, a bookstore/coffee shop that according to the internets is popular among artsy expats. Yes, I am aware that seeking out a place that fancies itself an artist haven is painfully cliché and in all likelihood not the least bit artistic. Something like going to Applebee’s for a home cooked meal. But, it looked like a comfortable place to sit and that is all I wanted for what I hoped would be a successful Saturday writing session.

It was cold when I left the apartment; colder than I expected it to be. I walked up Seifertova to the Husinecka tram stop. The Black Keys “El Camino” album was blasting through the headphones. I boarded the Number 9 tram. It was crowded with people bundled up in scarves and heavy jackets. I stood near the front of the tram holding onto a yellow support pole while the tram rolled over the tracks into the heart of the city.

I exited the tram at a stop near the river and walked across cobble stone streets toward the café. In the center of town every street has character, every street is beautiful. Prague was meant to be cold. In the middle of summer when you find yourself ducking into shaded overhangs to escape the sun you can sense that something is off. The images of the city seem overexposed--blurred out by a flash that isn’t needed and doesn’t belong. In the fall the city is perfect. Detail down to the finest grain shows on the ancient buildings and the spires dissect the sky in clear reaching lines. Cold brings the city into focus. It makes it a place you can feel on your skin and in your heart. 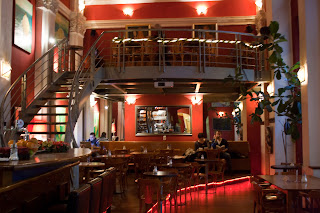 I got to Globe Café minutes after it opened. It’s a great space; high vaulted ceilings, maroon walls framed in white, comfortable well-worn chairs. The front of the shop is a bookstore and the back is a café. I ordered a coffee and courting my inner fat man (as I often do) ordered a stack of blueberry pancakes as well. I devoured my pancakes and slurped my coffee while catching up on important current events. According to Yahoo today’s most important global happenings include; Harry Potter breaking up with his girlfriend, Sesame Street suing the manufacturer of a sexy Big Bird costume and Tom Hanks dropping the F-bomb on live TV.

I pushed aside the white plate streaked with sticky blue and purple leavings and opened the notes I’d written for a novel I hope to write. It is tentatively titled “Wanderous.” I promise to reveal more when I have the details worked out.

The café was quiet in the beginning. And then all of the “artists” started pouring in. By artists I mean American girls with valley girl accents. I have learned to hate that accent since moving abroad. As a guy who considers Los Angeles home you would think I would be immune to it. Not anymore. Occasionally I crave the sound of English; not just a conversation held in English but the sound of English as white noise. But, then I come to a place like this and quickly remember that English can no longer be white noise. I hear every syllable. I eavesdrop on every conversation. And when the majority of those conversations are spoken in screeching Valley Girl OMG, Totally, Whatever, it makes me want to run to the nearest local cafe and surround myself with the blissful sounds of unintelligible Czech.

I was having trouble thinking over the Americanese so I closed my notes for “Wanderous” and started writing this blog instead. MB Abroad has been a creative lifesaver. I use it as calestecics, a mental stretch and warm-up before the difficult work begins.

The Globe Café has now officially given up on its artistic intentions and caved to the OMG girls. At this very moment the only thing louder than the Americanese is the American hip-hop thumping at club volume. I have headphones in. I am blasting Mozart and Beethoven. Rock and Roll. This is of course exactly what I should have expected when I sought out cliché.

Here I sit; an imitation of an artist; stately library chair, coffee, Beethoven’s “Mass in D major", the written word, a copycat down to the last detail. And to remind me of my folly I am surrounded by slang and chat speak and a sick beat that even Ludwig Von cannot keep at bay.

I need to get out of here. Number 9 take me home.