The Rainbow Over Me

It took thirty hours to travel from Manila to Prague. There were expected hiccups: a frustrating and poorly organized transfer desk in Abu Dhabi. And unexpected hiccups: Paolo getting pulled over on the way to the airport and bribing his way out of a ticket in a town called Mexico.

The trip wasn't easy and it wasn't hard either. It was a task--a stack of papers that had to be dealt with and when I finally left the office I was halfway around the world. Over that thirty-hour period I slept for no more than four. I arrived in Prague at 6am and reached the Blind Eye Hostel at 7am. Check in wasn't until hours later but I didn't care. As always I was too high on arrival to consider sleep. I took a shower, stored my bags and reintroduced myself to the ancient and beautiful streets of Prague. 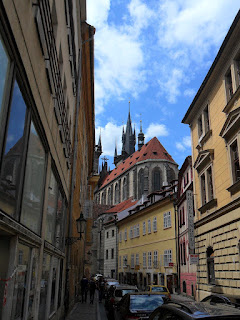 The architecture in Prague seems too storybook to be real. I ran my hands along walls expecting to feel the bumpy soft texture of paper mache. And I rounded every corner expecting to see scaffolding and lighting crews behind the facade. But, it's all real--an accumulated architectural history dating as far back as AD 920.

That evening the hostel put an interesting spin on the B.Y.O.B concept. They provided beer and the guests brought meat and vegetables and we had a back-patio cookout. I drank a lot of beer and later when we went to a bar called Bukowski's I drank a lot of Jamison's in highball glasses filled to the top. I did what I do; I talked a lot and told stories and tried to make people laugh. The next morning over breakfast I dipped into some narrative or another and the guy sitting next to me said, "Yeah you mentioned that last night" and I realized that I had done what I do a bit too much.

My to-do list was long and important so I shook Bukowski's out of my head and started my day. I dropped my resume off at a couple of schools and emailed a dozen others. I got a Czech phone and used it to set up appointments to view available apartments. And I took a long hot walk across the city to meet a man named Martin and his friend Pavlina. 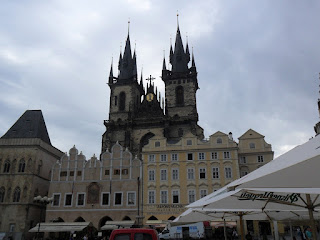 My mom often says, "You've always had a rainbow over you." It is her way of reminding me that even though I am good at chasing what I want, every now and then I need to stop to appreciate my good fortune.

Mi Madre is a smart lady.

Prior to my arrival I emailed Martin and a half dozen other Prague locals on CouchSurfing.org. I was hoping to find a place to crash for a few days and save myself some money. Only Martin wrote back. He said that he couldn't host me, but that his friend Pavlina might be able to in exchange for English lessons. 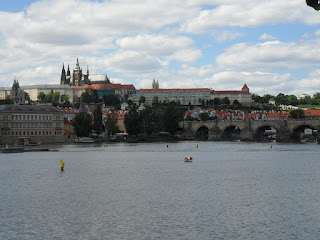 I agreed to meet Martin and Pavlina in front of an old church which we quickly walked away from in favor of a beer garden in a park. Over the course of a beer it was decided that I would live with Pavlina and her family until August 1st. Free accommodation in exchange for English lessons. Then for the month of August, I would sublet an apartment from another friend of Martin's who will be in Germany for the month. Her apartment is walking distance from Prague Castle. I did nothing to facilitate this. The whole grand plan was discussed and schemed independent of me. I said very little. I nodded and tried not to screw it up.

Pavlina picked me up at the hostel the following morning. I told her that I would be happy to take public transportation. She insisted that I not. Pavlina and her husband Robert (pronounced: Row-berdt) live in the suburbs outside Prague. They have two young daughters Tereza (7) and Kristina (20 months). The eldest is away visiting her grandmother. Their neighborhood is sleepy and new. The room they have made up for me is the nicest room I've had since I left home. 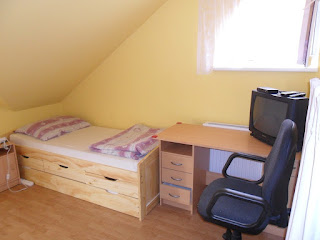 Pavlina is sweet and happy. She doesn't want me to give her formal lessons. She is a stay at home Mom and wants to fill some of that time practicing her English with a native speaker. That first afternoon we took a walk to the local market. She pushed Kristina in a stroller and I taught her words like, stroller, sidewalk, path and field.

On the way back Kristina refused to walk. She was focused on filling her little white hat with rocks and dumping them out. I hoisted her onto my shoulders and held her little hands and we made our way home. I had only met half the family and I felt fully at ease and that seemed too good to be true. Pavlina spoke to Robert on the phone and informed me that her husband was, "grill meat at home."

"Grilling meat at home," I corrected

As we approached the house I wondered what Robert would think of me; a grown man living in his house free of charge and carrying his baby girl on my shoulders before I had even shaken his hand.

When Kristina saw her Daddy she bounced around squealing and giggling and shouting, "Dada, dada!" He threw his arms wide and I handed her over. He shook my hand and told me that he was happy to have me in his home. He said it with honesty. 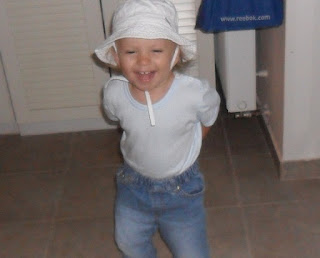 About Kristina. I adore this little girl. She has fly-away golden hair and an infectious laugh. She has a trampoline in the backyard that she bounces on singing, "hop, hop, hop." She is too young to realize that the whole world is not a trampoline so she doesn't walk anywhere. She hop, hop, hops through life giggling and laughing.

Robert had already eaten. He was on his way out the door. Bruce Springsteen was opening his European tour that night and Robert wasn't about to miss it.

"Why aren't you going,? he replied.

Seeing that I didn't quite know how to respond he said, "Wait a moment. Stay here." He went into his office and came out with a huge framed photograph of himself and Springsteen standing with their arms around each other. The picture had to be fifteen years old. Robert and The Boss. He it showed it off with a stoic Eastern European pride that thinly masked his fanboy, "squee!" 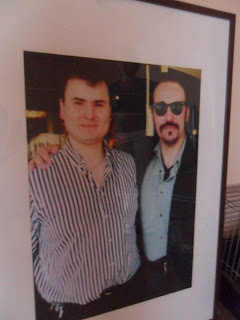 The following morning we stood in the kitchen drinking coffee and tea and talking about the concert. Talk about The Boss led to discussions about Czech history, geopolitics and the EU. Robert owns a travel agency and is nearly fluent in English. I asked him how he learned. This is what he said without a trace of bullshit.

"In maybe 1985 I had a Cyndi Lauper album and I listened to it until I remembered all the words and then I practiced."

Today is Friday. I met this family on Wednesday. I should feel out of place. I should feel like a stranger walking on egg-shells. I don't. They have treated me like I am a long lost American cousin not some random unemployed dude mooching a room in exchange for conversation. Pavlina did my laundry yesterday. I begged her not to and when I wasn't looking she did it anyway. She even separated the whites and colors which I haven't done since, well...ever. The only feeling of discomfort I've had is pangs of guilt about being spoiled. 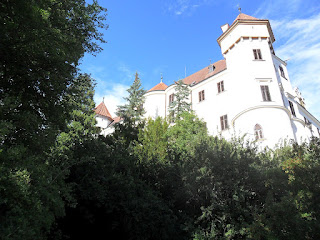 They even took me to a castle. Pavlina and Robert discussed it and decided that the Kopopiste Castle would be a good day trip. Pavlina drove. Kristina rode in the back. As we passed through the Czech countryside Pavlina gathered her thoughts and said, "How do you say, big road? High street?"

I turned back and stuck my tongue out at Kristina. She giggled and bounced on her whole world trampoline.

I rested my head against the window. I looked into the side-mirror searching for the rainbow over me. It had to be there.