Dale and the Golden Nugget 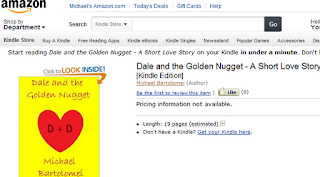 I wrote a short story called Dale and the Golden Nugget that I think is funny and worth reading. Since it isn't the kind of story that literary magazine editors salivate over, I thought I would give Amazon's Kindle Direct Publishing a shot. You can download the story for $0.99 at:
http://www.amazon.com/dp/B008LVD4Q2

Love it or hate it let me know what you think--either on the Amazon page or in the comments section  below. 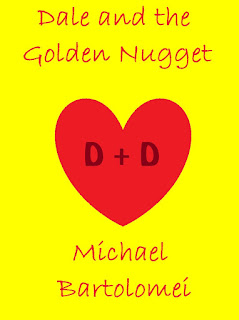 Dale is sure that his plan is fool proof; steal the 3rd gold nugget discovered in the California gold rush, pour his heart out to Darla the love of his life and leave their small mountain town in the dust. The heist is the first big idea Dale has ever had and the first big move he has ever made. Despite his careful planning the heist goes hysterically haywire putting the happy ending to his townie fairytale in peril.

First Page Teaser:
The showroom of the Twain Harte Historical Preservation Society was empty save for a crumpled 8 ½ x 11 sheet of paper, a folding metal chair and a few shards of glass. Hours earlier the room had showcased the 3rd gold nugget discovered in the California gold rush—the Preservation Society’s pride and joy. Dale Dilbert took it. He took it in the name of love.
Dale’s dad was fond of saying, “Dale you are about as bright as a firefly with its butt put out.”  Dale muttered these very words to himself as he cowered behind the bar at the Wild Coyote. He had just poured his heart out to Darla, the love of his life. He told her all the things he always wanted to say and never could. He offered her the nugget. She held his cheeks in her hands and pinched them hard. She wobbled and shook his face. She opened her mouth to speak, but before her sweet words of love and acceptance could pour out (as Dale was sure they would) sirens pierced the moment—killed it good. And Darla ran away.
Dale slumped back dumbfounded. He stared into the wall-length mirror above the bar and watched the reflected image of the sheriff wiping his feet on the evidence. The sheriff removed his sunglasses and finger-tapped his holster like a gunslinger of old. Dale’s head was in a noose and he had nowhere to go but down. And yet, his only thoughts were of Darla. She ran away. He poured his heart out and she ran away...