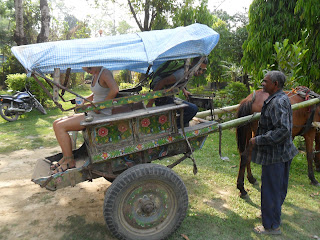 I was sitting in the back of a wagon being pulled by a horse charging at full gallop over pothole lined roads. The wagon was covered with a blue and white checkered piece of plastic sheeting that made the whole experience feel like being violently shaken inside of a bread bag.  Well what do you know, I thought as the skin on my finger pinched between metal joint and wooden seat, there is something worse than Nepali buses.

This was my introduction to Chitwan National Park. Leanne and I were on our own at this point, Blake and Brittany were Thailand bound. We only had a day and half to see the park so we didn't want to waste any time. The bread bag pony ride dropped us off at the edge of the Narayani River where we got on a long wooden canoe. Our guide Rajeetz sat up front scouting for wildlife while an oarsman at the back steered us using a bamboo pole. 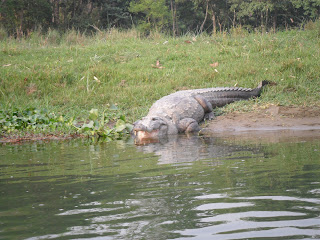 The canoe ride was planned for the late afternoon because that is the best time to see crocodiles. The timing was perfect. We saw several big ass crocs basking in the setting sun. After the canoe ride we went to an elephant breeding center. The center had several baby elephants including one that was only 15-days old and very friendly. It was strange to think that the little guy had been born while we were somewhere on the mountain.

We stayed at the Annapurna View Lodge, a nice quiet place that only cost 150 rupees per night. By comparison a beer cost at least 250 rupees. The next morning Leanne signed up for an elephant bath, which turned out to be brilliant. While she was sitting on top of an elephant getting sprayed down with many a trunk full of dirty river water I sat in dry safety with a bunch of Nepali dudes taking pictures and laughing my ass off. "Sploosh! In the face!" 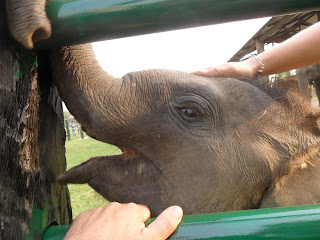 We spent the next couple of hours lounging by the river, watching elephant baths and waiting for our jeep safari to start. I was excited about the safari. Chitwan National Park is home to Bengal tigers, wild boar, rhinos, and hundreds of other animal species.

The first hour was dull. The jeep bounced and bumped over rough roads and the animals stayed hidden. The closest thing to wildlife we saw were the two little beasts sitting across from us. A terrible family all around. The dad thought farting loud and proud amongst strangers was funny. The mom thought it was perfectly acceptable to chuck her empty Sprite bottle into the jungle. The son was a whiny, squirmy little piss-ant. And the daughter...ugghh the daughter. She was a heinous little beasty; unibrow, jacked up teeth that looked like amputated tentacles. And annoying--wouldn't shut up, no concept of personal space. She was so bad that I almost started hoping all the shots to the undercarriage I was taking compliments of the bumpy ride were killing off my boys, lest I ever face the horror of having my genetic imprint on an abomination such as that.

Anyway, the real animals showed up soon enough. We saw bison, wild boar, monkeys, peacocks, the backside of a bear and as promised Chitwan showed me her rhinos. The only thing we didn't see was a tiger, but did we really want to see a tiger in the wild while riding in an uncovered jeep with a tentacle-toothed beasty just asking to be eaten? I think not. 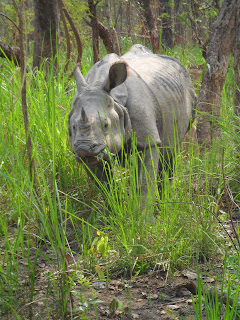 I spent the evening sipping on Tuborg beers and listening to music. It was our last real night in Nepal. The next day we went back to Kathmandu to catch our flight out. We took another shitbox Subaru taxi ride. At one point I was sure the cabbie had managed to get us stuck on top of a boulder in the road, but alas he was able to rock us free and drop us off in time.

I am writing this entry from seat 20A on India Airlines flight 214. We just lifted off. Kathmandu is disappearing below. The power went out three times at the airport while we were waiting to board. I think their air traffic control system is a dartboard. I feel safer up here.

In a few hours I will back in Thailand. This adventure is over, but the next starts in seven short weeks.
Posted by MBabroad at 5:49 PM