I originally scribbled this entry into a notebook while sipping on a Kingfisher beer at the Delhi Daredevils sports bar in the New Delhi airport.  Scribbled being the operative word, I can barely read my own handwriting.  It's like an accidental secret code. 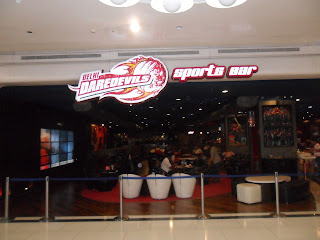 Anyway, my stay here in Northern India is both short and a helluva lot longer than I would like.  No offense to the New Delhi airport, which is a fine place to catch a plane, but I have to be here, in transit, in limbo for 19 freaking hours.  Yes, practically a day.  They have a hotel here at the airport.  I sauntered up there a few minutes ago thinking I might treat myself.  Then I saw the price tag.  Nope.  Ain't happen.  Teacher Michael doesn't have that much change in his pocket "goin jing a lang-a-ling."

It's around 10pm now and my friends are guarding the sweet spot I staked out on a lounge sofa.  It won't be easy sleeping through Last Call announcements but that's what pills and earplugs are for, right?  The herculean layover I'm on isn't the first of my In Transit trials on my way to Nepal.  The first started two days ago in Surat Thani, Thailand.

Blake, Brittany, Leanne and I left our house and took a 30-minute Tuk Tuk ride to the Surat Thani bus station, where we boarded a bus and settled in for a 12-hour ride to Bangkok.  The bus ride was fairly uneventful, with the exception of the 30-minute span I was panicking because I had take a massive whiz and the bus didn't have a toilet and the driver didn't seem to have any intention of stopping.  He did stop.  Eventually.  And after doing the potty dance all the way to the urinal I emptied my bladder, got back on the bus and pulled my hoodie over my face to go to sleep.

I slept like a baby.  For almost 3 1/2 hours.  The bus arrived in Bangkok at 4:21am.  Bangkok is a fantastic place to be at 4:21am--if you're stupendously drunk.  Sober, barely awake and crawling off a bus, it sucks.

We couldn't check into our guest house until 7am, so we sat at a cafe sipping coffee and listening to drunk boys making last ditch efforts to talk drunk girls into joining them for a nightcap at a quieter, naked-er locale.  The girls listened with amusement.  I listened to the the boys with a permanent wince, thinking, Jesus Christ is that what I sound like?

Blake and I had an appointment at the American Consulate that morning to add additional pages to our passports.  I now have 48 brand spanking new pages to play with.  When I'm done with this passport I'm going to cut out the pages and make a colorful collage to hang on my wall.  It's going to be that beautiful.

I spent the rest of the day reading a book and people watching at Gecko Bar on Rambuttri Rd.  (In my opinion the best people watching spot in Thailand's biggest city.)  That night several friends from Surat met us at the very same location to people watch with beer instead of coffee and a book.  Bangkok is the launching pad for travel around South East Asia and we had friends going in every direction, Burma, Laos, Chiang Mai.  We took advantage of the tourist parade by playing a game that required us to drink every time we saw any of the following:

Needless to say, many many beers were consumed.  However, with a 19-hour layover on the horizon we called it a night early.  Nobody wanted a hangover with that kind of limbo looming.

The flight from Bangkok to New Delhi was 3 hours.  Tomorrow's flight from Delhi to Kathmandu will take under 2 hours.  The distance between the exotic place that I live and the exotic place that I'm going isn't that far on a global scale.  It can feel like it when you're traveling the tuk tuk, sleeper bus, 19-hour layover way,  but that way is the budget travel way.  You save money by sacrificing time.  And you are happy to do it because you have the time to sacrifice.

I don't need to be back in Surat until the middle of May.  I haven't booked my return flight yet, because I still don't know how I want this trip to end.  Do I spend more time in Nepal?  Do I go to Tibet?  Do I spend a couple of weeks in India?  I don't know.  Time will tell.  But, I do know that I will continue to spend 19-hours in transit if it means I can see just a little bit more of this great big world.

BTW - A Big Mac in India is called a Maharaja Mac and it's made with chicken. 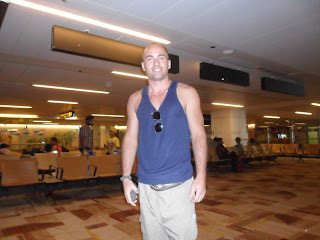