The Boys Are Back In Town

Here is what I can tell you…

Wednesday, December 28th 2011, my first visitors from America arrived.  Jaime and Miles flew in from Bangkok and took the shuttle into downtown Surat Thani (downtown meaning the middle part of the biggest street.)  I waited for them outside of the Tops Market.  When the shuttle pulled up I didn’t see them get out so I walked around to the side and spotted Miles at the back of the bus.  I waved them off and called my friend Ryan who drove down on his motorcycle to help get them to the house.

Although exhausted from their travels we hit the town…has much as can be done on a Wednesday.  We ate dinner with my roommates and friends at a place called Bali Bar which specializes in good food served by pretty girls in tiny dresses.  Where else was I going to take them? 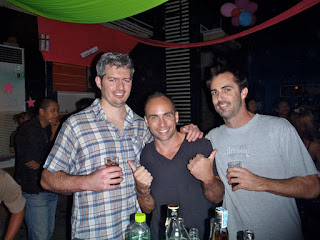 Afterwards we went to CN Blue, the club of choice on most nights.  We listened to crappy Thai pop-music and they marveled at the fact that we were able to walk in with our own bottle of whiskey and that I wasn’t lying about the Thai club-goers treating them like minor celebrities.
The next morning we caught the 8:30am bus/ferry to Koh Phangnan.  In was sunny on the way out so we sat on deck eating instant breakfast cereal, drinking beer and making new friends.

While we were enroute from Surat, our friend Justin was enroute from Koh Tao.  He arrived a few days earlier and took an island detour.  Over email I told him that we would arrive around 1pm and that he should meet us "by the bucket stands with dirty names." 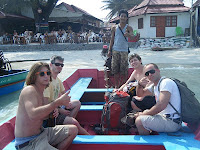 We immediately hopped on a longtail boat and cruised around the bend to one of my favorite beaches.  It is not the most beautiful beach in Thailand but it has the best sense of escapism.  We didn’t even have a room.  The plan was to sleep on the beach and that’s what we did.

We spent the rest of Thursday swimming and lying around.  On Friday we did a two hour session of yoga, followed by a holistic-healing treatment.  We ate amazing salads for dinner, drank Jasmine tea and went to bed early. 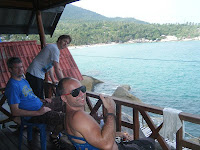 If you believed any part of Friday you know nothing about me.  Nothing at all.

Saturday afternoon we went back to the main beach on Koh Phangnan to get ready for the big New Years Eve party.  We met up with my friends from Surat at a nearby resort.  I wasn’t the only expat with people visiting so we had a big group.  Around 10:30 or 11:00pm we piled into two tuk tuks and drove headlong into the madness. 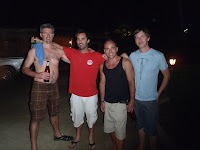 The rest of the night was a wash for me.  Justin and I were in one tuk tuk with a bunch of random strangers.  Everyone else was in the other tuk tuk.  Our tuk tuk couldn’t make it up the hill so we had to get out and push.  We never saw our friends again. 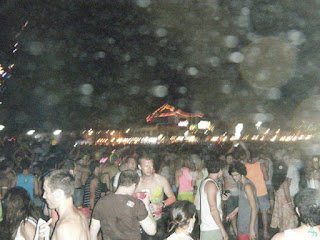 Justin and I spent more than two hours looking for everyone else (with occasional stops for bucket refills and snack food.)  I was really excited going into the party.  I loved the idea of merging my friends from home and my friends from here and having a huge ruckus New Years blowout.  I was convinced we would eventually run into them.  We didn’t.

Justin handled our isolation with calmness and grace.  I got pissed-off about it.  Unfairly.  No one was to blame.  We were at one of the biggest New Years Eve parties in the world.  Finding our other friends would have been akin to finding a needle in a haystack. 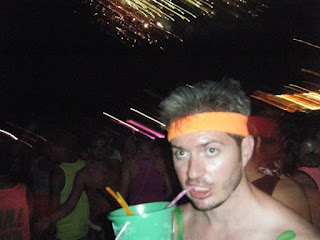 Justin and I decided to get in a boat and go back to the beach we started at.  We decided this after standing near the ocean and seeing countless guys and girls peeing in the ocean and winging beer bottles at each other.  The Koh Phangnan parties draw all the finest douches from around the world.  I’m glad I’ve experienced them, I won’t go again.

We met up with Jaime and Miles the next morning and found out that they had ended up on a solo mission of their own--like tossed dice we ended up on different parts of the island.  I would have preferred to be together but it was fun exchanging stories.

The majority of the globe is hungover on New Year’s Day.  It would take a pack of idiots to try to get from Koh Phangnan in the Gulf of Thailand all the way across the country to the Andaman Coast.  We are a pack of idiots.

The ferry was overflowing with people trying to get off the island.  That was fine until it started raining and we got stuck outside.  To make matters worse it was cold.  It's never cold in Thailand.  WTF?  Jaime found shelter under the rubber mats protecting the luggage and Miles found the rest of us a wind-sheltered spot nearby. 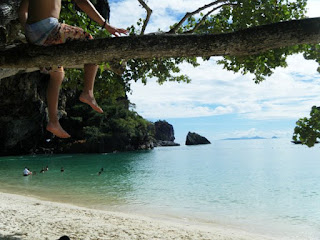 We took a longtail boat to Railay Beach.  I have been to Railay several times and it remains my favorite place in Thailand.  We spent the day exploring and lounging on the beach.  At night we watched a sweet fire show.  (Jaime, Justin and I watched a sweet fire show; Miles was rooting around under the outside deck trying to find the sandal he dropped.)  We had a great night that didn’t end until 4:30am.

We got up fairly early the next morning and watched the second half of the Stanford-Oklahoma State bowl game.  That was the first live football I’ve watched in well over a year.  Afterwards we went back to my favorite beach on Railay.  A few hours later I said my goodbyes and made my way home. 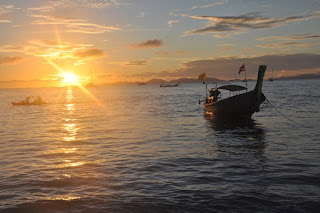 As I type this Jaime, Miles and Justin are still traveling.  Tonight will be their final night on Phi Phi Island.  I can’t wait to hear the stories about what I missed.

Okay now for the sentimental crap…

It was really great having friends from home visit.  There is an easy familiarity with old friends.  You can meet-up on the other side of the world and it doesn’t feel different, it feels the same.  And that feels good.

It was nice to talk about home; about how things are changing and how nothing has changed at all.  Back home the milestone peaks are being followed by lulls of easy predictability.

Out here, living abroad, the big peaks are followed by smaller peaks.  Life is jutting and jumping and unpredictable.

I booked my tickets to Nepal.  I'm officially hiking to the basecamp of Mt. Everest in April.

I didn't bring my camera anywhere.  I will post more pictures after I raid what the boys took.

Boys - If you're still reading this, come visit me in Prague.  A new adventure awaits! 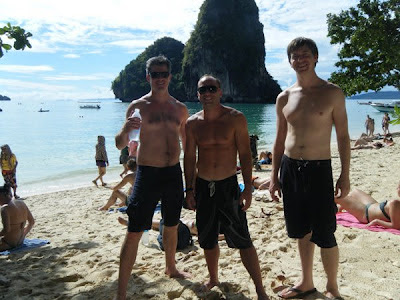