I had the day off in honor of Father's Day.  In Thailand Father's Day coincides with the King's Birthday.  And since the King is like a cultural mash-up of Elvis, Abe-Lincoln and Jesus it's a big deal.  With plans to go away for the weekend I wanted to be productive.  I got up at 7am and wrote like it was my job.  I finished around 4pm having added a very acceptable number of pages to my book. 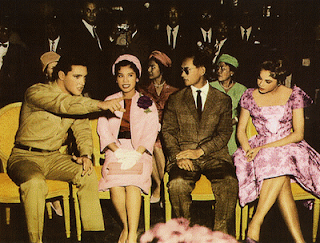 That night I went to a party at house a few of my friends are renting.  It's a big place with four bedrooms, hardwood floors, A/C and a sizable yard.  They are paying 7000baht a month.  Split four ways that comes to about $55.

We were being loud and obnoxious and beer-fueled when the neighbors came out to say hello.  We thought they were going to curse us out in Thai and say, "Police!  Police!"  Instead they gave my friends a bottle of whiskey, a bottle of wine and a carton cigarettes and said, "Welcome!  Welcome!"  Thailand.  The Land of Smiles.  Gotta love it. 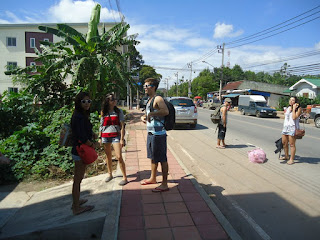 As planned we took a minibus to Khao Sok National Park.  The Lonely Planet Guide describes Khao Sok as "...like stepping into Jurassic Park."  It was high on my must-see list the first time I visited South East Asia and has been sitting on the tippy-top of that list for months. 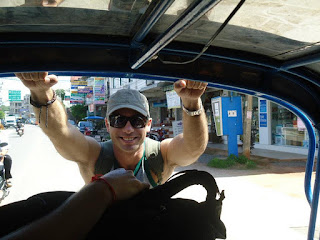 SO FREAKING WORTH IT.  We rented floating bungalows on Cheow Larn lake.  The boat trip to the bungalows alone was worth the cost of the whole trip.  Which incidentally was less than $60 for two nights accommodation, transportation, a guided hike and meals.

That afternoon we relaxed by the bungalows, swam, kayaked, and floated on tubes.  I didn't get a tube.  I was distressed at first, but then I remembered my redneck roots.  I remembered my Mom and Dad and their adult friends floating in New Hogan Reservoir drinking Coors Light with their legs through the armholes of life vests like giant buckled-up diapers and I thought, YES!!  Needless to say I was floating like a happy incontinent moments later. 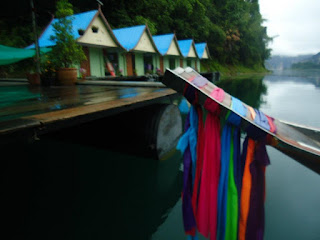 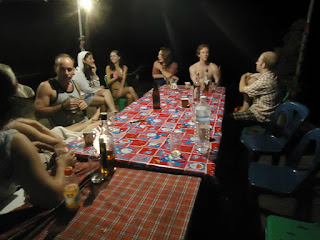 That night we sat around the table, listening to music and holding a surprisingly fun and funny talent show.  The fact that we went through an unconscionable amount of Thai whiskey may have had something to do with that.  My favorite line from the talent show came from one of the girls in our group.  She had done a magic trick and was deservedly proud.  One of the guys got up and as a joke pretended like he was going to whip out his junk as his talent.  The girl with the magic trick blurted out, "If his d*ck beats my magic I'm going to be pissed!"  I hit the floor with that one.

There was more music, there were more games, there was naked kayaking.  It was a good night.

Sunday:
I woke up, took two steps out of my bungalow and plunged into the lake.  There is nothing like a jump in the water to wash-off the night before.

We left fairly early in the morning to go on a hike.  The sky was grey and angry.  I was incurably thirsty despite drinking bottle after bottle of water.  And the two people in front of me on the boat were singing Disney show tunes for some F#&k-my-life reason.  I wasn't all that stoked about the morning adventure, but it ended up being one of the best hikes I've ever taken.

We started out on a leisurely stroll through the jungle.  The girls stopped to take pictures of butterflies.  The guide made everyone palm frond and flower jungle hats and picked some dainty jungle edibles for us to sample.  It was okay.  Then it got badass! 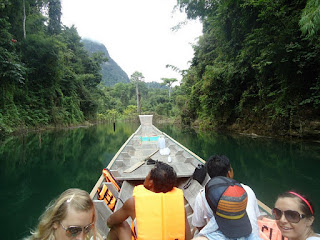 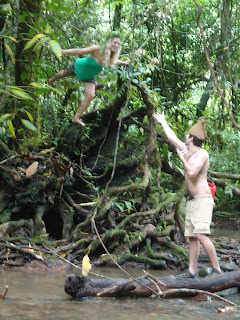 We crossed paths with another guide who advised us to turn back.  A tiger had mauled a deer on the path that morning.  The warm carcass was still there.  Our guide sent us off to a waterfall while he had a think on whether risking our lives was good or bad for his career.  Ultimately, he came up with this solution, "If we see tiger run in straight line, he only eat one person.  You run this way, this way, this way, I won't be able find you again."

Naturally that was good enough for us and off we went.  We got to the mouth of a cave.  The entrance was only a few feet high and narrower than that.  We squeezed in armed with flashlights and headlamps.  The water in the cave was waist deep in most places, neck deep in others.  The walls were high and rocky and narrow enough to brace at arms reach.

We climbed over small water falls, and past others that started up high beyond the reach of our lights and trickled down over brown bulbous stones that looked like they had been melted and hardened mid-drip.  We passed through wide open spaces with high-up ceilings covered in bats.

If I had to guess I would say the cave was at least half-a-mile long.  It was a trek; a difficult, dark, rocky, bat-filled, glorious trek.  At the tail-end a triangle-shaped opening revealed the vivid green of the jungle and we emerged looking like this: 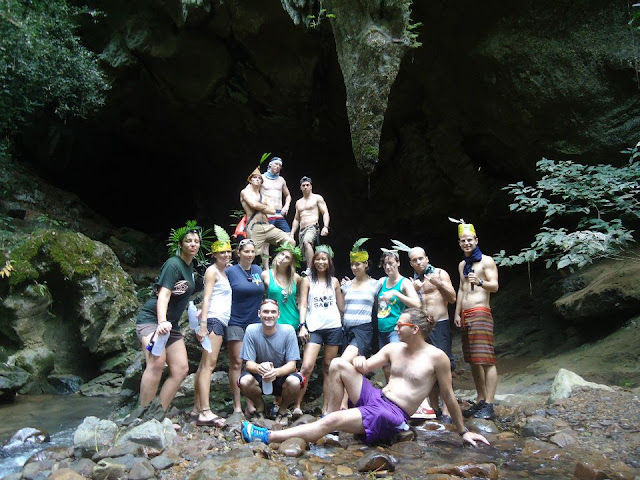 On the way back to our boat and a safe escape from the hungry tiger we saw the deer carcass.  A huge chunk of its neck and abdomen were eaten away.  Claw marks ran down its sides.  Did we run?  Did we cry?  Did we say things like, "poor poor deer."  Nope we did this: 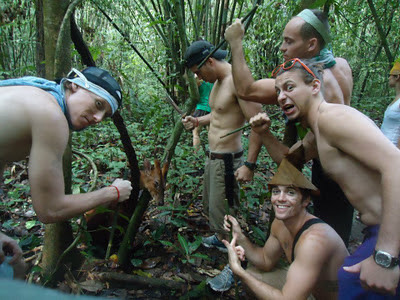 And then we drank Thai Whiskey and relived the day in Big Fish detail.

Monday:
I followed the same two steps I took the morning before and plunged back into the water.  I floated in a life jacket diaper for a while, walked along a floating log and got the inner-tube lounge session I missed on Day 1.

In the early afternoon we took a 90-minute bus ride back to Surat and I spent the evening doing absolutely nothing.

So how was your weekend? 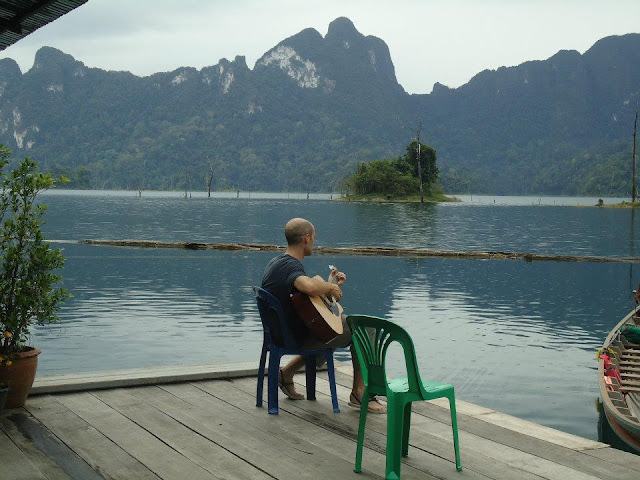 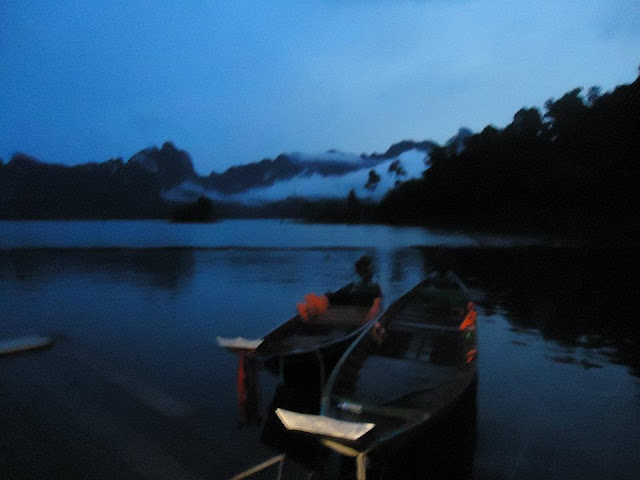