Rain poured over the dense green mountains. The day had been stifling hot.  The rain was a surprise.  Low lying clouds nestled into the crevices of the mountain gave the appearance of rising steam.  It was a beautiful tableau.  I was terrified when I witnessed it. Traveling by minivan in Thailand is like hurtling down the death shoot from The Running Man.  I had to concentrate on the pretty stuff outside because inside our driver was gunning it through the rain and around a blind corner while passing a barf bag to a girl in the back.  The girl in the back barfed three times.  I don't know if it smelled I was in the front with the seat pulled so far forward the air freshener was more or less dangling from my nose. 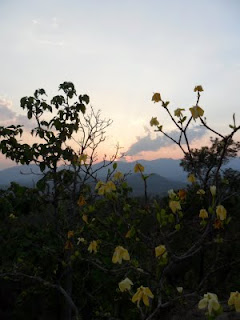 On this particular minibus ride I was hurtling away from Pai.  Pai is a tiny mountain town in Northern Thailand.  I had heard nothing but good things.  My experience was decidedly mixed.  Pai is stunning; flat pastures surrounded by rising jungles, canyons brimming with bright green foliage and blooming flowers, quiet bungalows along a lazy river.  Pai is the perfect escape...if you're a goddamn dirty hippy.  Pai is overrun with dreadlocks and fisherman pants.  Your chances of interacting with a Thai person are slim.  Your chances of seeing six white people sitting in a circle with guitars singing "Let it Be" are all but guaranteed.  I imagine Pai is quite distressing for some hippies.  Imagine if you were the only hippy in Corn Cob, Iowa.  No one else had Adam Duritz hair or a hemp hat the size of a cargo net.  You were different, man.  Then you got to Pai and discovered that you were indistinguishable from everyone else who fancied themselves different.  In Pai you were the same.  I don't have anything against the hippy crowd.  Outside of hair and clothing and mad hacky-sack skills I have many hippy tendencies.  If this was my first trip to Thailand the demographics wouldn't have even registered, but I live here, I see Thailand differently now.  In Pai I felt like a perfectly nice Thai town had been displaced by a high school clique and that made me a little sad.

With Songkran still a few days away Shane and I decided to go trekking.  Three days and two nights of hiking, elephant riding, white water rafting and drinking beers around a campfire.  Our first stop was the Karen Longneck Village.  The Karen Longneck people were discovered thirty years ago living deep in the jungle near the border of Thailand and Myanmar.  They had no contact with the outside world.  They believed in a form of spirtualism akin to voodoo.  And their women all wore heavy gold rings around their necks.  The rings were not merely ornamental, village chiefs inisted they be worn to defend against tiger attacks.  That's hardcore.  I feel like a gentleman if I offer a woman my coat on a chilly night. You must be wondering how long it took to hike to such a remote and ancient village.  It took about 14 seconds, a tuk tuk dropped us off.  You see the Karen Longneck tribe was discovered by Christian missionaries.  The lucky longnecks were given the gift of Jesus, led away to the edge of town and allowed to sell trinkets and wave to white people.  These jungle cats got franchised!  Sure its exploitative, but it's better than a tiger dangling from the larynx right? 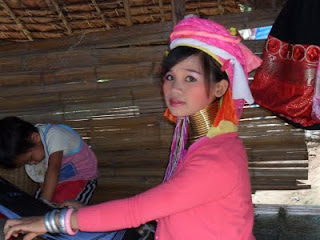 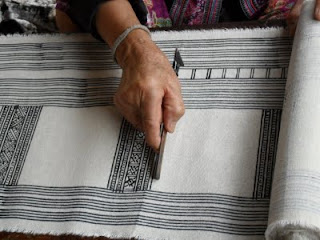 Coming soon...Elephant trekking the movie!  I kept the video camera running from my seat atop a paciderm.  Uphill, downhill, bathing in a river, another elephant taking the biggest pee ever recorded, you'll see it all, just as soon as I'm done traveling and have time to edit it.

Our guide for this trek was a Thai man named Khai.  Khai had a beer gut, smoked a lot of cigarettes and wore a Harley Davidson American Flag bandanna around his head.  If he were American he would have introduced himself as "Road Dog" or some other roadie cliche name.  Khai belived in taking it slow. Real slow.  I lost count of how many times I rear-ended the person in front of me.  If we moved any slower we would have been standing still.  Yet, somehow we managed to hike our way to the Lahu (top of the mountain) village by the end of day one.  The Lahu village is home to 30 families and a bunch of scraggly cats.  We were assigned a village century, we called him the Cat Whisperer.  He sat quietly in our hut at all times.  Occasionally a cat would try to sneak in and the Cat Whisper would wave his Florida hat, hiss and stomp if necessary to chase it away. 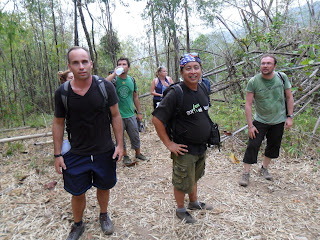 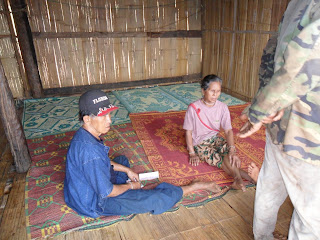 The second day of trekking took us through dense jungle trails where we visited two beautiful waterfalls.  We stopped to swim at the first waterfall and had a cannonball contest with a local kid.  He was about four years old, butt-naked and full of personality.  He knew how to say two things in English, "Hello!  You...one more" and "Hello!  Coca-Cola, Coca-Cola."  Anytime we stopped paying attention to him he would wad up a moss ball and lob it at us.  At one point he rubbed moss all over himself like he was soaping up, gave a primal yell and plunged green and gooey into the water.  He was a funny kid.  That night we camped in a hut alongside a river running through the jungle.  The sounds of nature echoed.  The stars shone bright.  It reminded me of camping as a kid.  I loved it.

On the final day we hiked down the mountain to the river below to go whitewater rafting.  It's the dry season so the rapids were minimal but it was still fun.  We also got to try bamboo rafting.  I stood at the front of the raft and steered by pushing a bamboo pole against the river bottom.  I knew when to push off because a our river guide yelled, "Captain Jack more right" or "Captain Jack more left" anytime we needed guiding.

We arrived back at the hostel dirty and tired, but didn't have a moment to rest.  Blake, a friend from Surat had arrived to join in on the adventure.  First there were two in our wolfpack then there were three.  Also, it was the start of Songkran (Thai new year).  Songkran is a three day water fight.  As I type this thousands and thousands of people are dancing in the streets soaking wet, throwing water, drinking beers and loving life.  I need to get back out there. 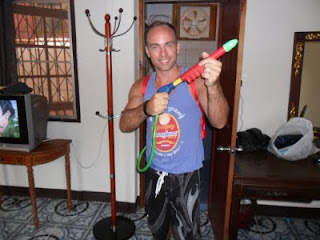 Visit my FB gallery 6-weeks to kill if you want to see more pictures.
Posted by MBabroad at 2:16 PM