Out of the muck and into the mire

We didn't leave Surat Thani--we escaped. The night we departed the rains hit hard and bad turned to worse. The flood waters moved from inches to feet. Running water was shut-off. A navy ship was sent to rescue tourists from the islands. Army trucks were sent to get them to the airports. The city areas were sunk, and the rural areas which are most areas were drowned. Thirty-five people died in our province. The Thai people will wait for the waters to recede.  They will sweep and mop and re-open with their trademark smiles and Sawasdee-kas. The Thai people will do that. I'm from California. Where I come from rain is nature's smog mop. I got the f--- out.

Shane (my fellow traveller this trip) and I boarded the night bus to Bangkok. We peered out at the muck and the mire of the watery south until curiosity gave way to sleep.  We waited for the big bad city to wake us. Most of Thailand is sleepy and slow and content with a Mai Ben Rai attitute towards life. (Note: Mai Ben Rai can most closely be translated to the stoner's "Hey man, it's cool.") Bangkok is different. Bangkok is a huge, fast, global city with Thai distinctiveness and unrivaled variety. You can buy, do, find anything in Bangkok, all depending on how deeply you want to scratch. During the day we skimmed. We rented bicycles and tried (mostly failed) to ride around the old part of the city. We took a long tail boat ride through the ancient canals. We even did a little shopping. The days were touristy, cultural, safe.

At night we scratched. Bangkok after dark is a multi-level vile of poison. There are sidewalk cafes overflowing with shabbily dressed backpackers, upscale clubs catering to impeccably dressed Thai rich kids, seedy neon joints with naked girls dropping down from the ceiling. If you open a beer in Bangkok a hooker will magically appear. Open another and a ladyboy will test the fuzziness of your goggles. It doesn't have to be, but if you want it to be Bangkok is just as wild as you have heard.

With this in mind it was probably ill-advised to start Saturday night off with a bottle of Thai moonshine. (Note: Don't drink Thai moonshine. Imagine washing nasty week-old dishes with a crusty sponge, leaving the sponge out for an hour, then sucking on it.) With a moonshine glaze we walked out to the main road to hail a cab. As we were giving the cabby directions two gorgeous 6-ft blondes sauntered over. They were Dutch. This is what they said:


Dutch Hotness
Are you going to the ping-pong show?


Dutch Hotness
No. No. Get in. You will come to the ping-pong show with us. You have to, this is Thailand!!


Me
(That was enough for Shane, he was already getting in the cab)
A ping-pong show? You girls really want to see that?


Dutch Hotness
Of course. We are Dutch!

I didn't know what that indicated about the Netherlands or her people. I didn't care. I just got in. If you don't know what a ping-pong show is I can't explain it to you. This is a kid friendly blog. But know this, the odds of two statuesque blonde European girls inviting Shane and I to go to one is about as likely as God inviting the Devil to Christmas dinner.

Let's skip ahead a bit. Exterior; the glitzy part of downtown Bangkok. Interior; the high-rise apartment of a Finnish man named Ante. Shane knew the Fins. This is where we wanted the cabby to take us before plans got rerouted. The apartment had a beautiful view of downtown, pretty people were socializing inside, it was a great atmosphere, it was only the beginning. We had big plans for a big night out. Bangkok wakes up when most cities go to sleep. We left the luxury digs at 1:30am. The night ended at 5:00am when I left 7-11 intermittently eating wasabi peanuts and a Snickers. The time between was brilliant. At that time of night things speed up. Secret entrances, clinking glasses, jokes, revelry, dancing, little black dresses, music, it all intermingles and records in an undulating blur. Time becomes overwhelmed by experience. "Dude you should have been there" isn't a cop out, it's just what you say when you just can't explain.

In the mid 1400's the armies of Siam invaded the Khmer Empire razing and plundering as they drove toward the holy temples of Angkor. The great temples were abandoned and the Khmer capital was moved to its modern day home in Phnom Pehn. The Thai armies left the temples intact because they deemed them too glorious to desecrate. The Thai King wanted to emulate and improve upon the temples in his wealthy and prosperous capital city Ayutthaya. Ayutthaya became the crown jewel of South East Asia and an important trading partner for China, Japan, Portugal, France and the Netherlands. In 1767 Burmese armies invaded Siam razing and plundering as they drove toward Ayutthaya. Ayutthaya was abandoned and the capital moved to its modern day home in Bangkok. The Burmese armies didn't have the same reverence for Ayutthaya that Siam's armies had for Angkor. They burned Ayutthaya to the ground. Bricks were taken from Ayutthaya to build the wall surrounding the Grand Palace in Bangkok. A small but important connection between ancient and new.

Today, Ayutthaya is a sleepy, slow Thai town in the shadows of the city that was. The temples and ruins of Ayutthaya are still beautiful but clearly pail reflections of what they once were. 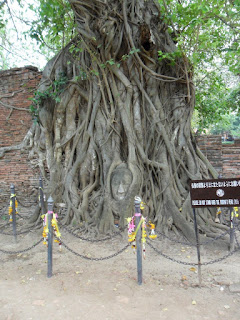 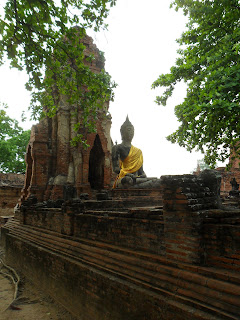 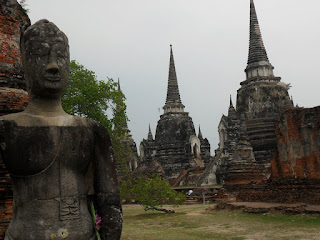 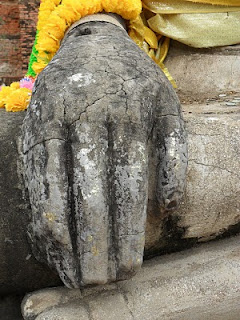