Something Light Before the Dark

I just arrived in Penang, Malaysia to process my Thai Visa application.  My room is a complete dumpster fire.  I am disturbingly used to that by now.

The blog entry below is something light.  The next blog entry will be something dark, the final blog about my experiences in Cambodia focusing on its darkest hours.

I have a really nice camera with a waterproof case for taking scuba diving pictures.  Inside of its suit-of-armor the camera is invincible.  You want to dive down 100 feet to take pictures of a shipwreck?  No problem.  You accidently knocked it against a railing?  No sweat.  You’re thinking of using the case as a place to keep your money dry?  Yeah…about that.

I decided to go on a snorkeling trip in Sihanoukville, Cambodia on a sweet triple-decker boat.  Looking for a safe and dry place to store my cash I settled on locking it away with the camera in the invincible underwater case.  Sleepy-eyed at 9am I strolled up to the gate of the triple-decker and popped open the case to pay the man.  The first breeze of an otherwise windless morning took that exact moment to sweep by sending my crisp fifty-spot fluttering into the air.  Naturally I lunged to catch the runaway cash.  As I watched my fingertips narrowly miss the wind dancing Grant I heard a soft kirplunk.

I didn’t even have to look.  I didn’t even have to finish the thought “Please tell me that wasn’t…”  The OH SHIT faces of the other day-trippers said it all, “Wow, that numb-nuts just chucked his camera right into the drink!”  I looked down at the now empty case and up to a guy from the boat crew who saw it all go down.  He held up a dive mask.  He knew it was pointless.  I knew it was pointless.  But, I gave him the thumbs up anyway.  This is Asia.  I had to save face!  I was going diving! 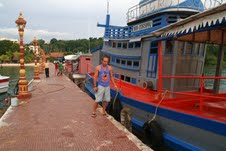 Mask in place and day-trippers looking on I slid between the dock and a giant barge and dived down 15 feet to the rocky bottom.  There it was, my camera, nestled among the rocks with the lens out as if it knew it was dying and wanted to capture its final watery moments.  I rose to the surface and held the camera high. I soaked in the light “jackass” applause.  I did it!  Face saved!

After the snorkeling trip (which was awesome btw) I took the camera to a local repair shop.  Did I believe they knew what they were doing?  Of course, they sold cameras and washing machines and whatnot.  I forgot that this is Southeast Asia where business is never turned down; it is accepted in storefronts and solved somewhere in the labyrinth of vendor stalls, motobike trips and guys who know guys.  I could have asked them to carve a papaya into the Mona Lisa and they would have said, “Yes, yes, come back in two days.”

I don’t mind hanging out on beautiful beaches, however I did stay in Sihanoukville longer than anticipated thanks to the camera fiasco.  Two days after dropping off the camera I went back to collect it and was told, “Tomorrow, tomorrow…or maybe the day after.”  I got the feeling that they hadn’t even looked at it, and I considered just taking it back then and there, but I decided a weekend on the white sands wouldn’t kill me.  Monday morning I still hadn’t heard from them so I went in determined to reclaim my drowning victim.  I had a bus out of town leaving in two hours.  Enough was enough!

“Sorry Sir we don’t have”

“What do you mean you don’t have?”

“We sent to Phnom Penh for repair”

“My camera is in Phnom Penh?”

The store clerk diligently wrote down Mr. Hong’s address and phone number in Phnom Penh on the back of my receipt, the only shred of evidence I had linking my camera to their store.  I stuffed the receipt safely in my back pocket and hopped on the back of a motobike ready for the next leg of my trip.

I arrived in Phnom Penh too late to track down Mr. Hong, so I decided to make it my first order of business in the morning.  After all, I needed to know if new camera shopping was on the day’s agenda.

Yeah, I lost it.  Mr. Hong’s address, the receipt linking my camera to the Sihanoukville shop, all hope of recovery, lost.  I felt like an idiot, but I wasn’t as mad as you might think.  It wasn’t fixable anyway, I thought.  You don’t need to waste your only day in Phnom Penh chasing the mysterious Mr. Hong, I told myself.  Buy a cheap camera now and replace the real deal when you settle in Thailand, I rationalized.

I listened to myself.  I went out and saw the sights in Phnom Penh.  I had a great night out on the town.  I was at peace with the loss of my beloved camera and its now empty scuba case.  I smiled broadly as I handed my passport to the Air Asia clerk, ready to check in for my flight to Penang.  The clerk opened my passport and a small slip of paper slid out.  She handed it to me.  It read: