Sovann is 14 years old.  He lives in Sihanoukville, Cambodia a small beach town along the southern coast.  He dreams of one day visiting the far away lands of his country’s visitors.  He memorizes the capital cities and population counts of their homes.  He believes their promises to “help him out when he is ready.”  He does not know where he will go first, maybe Australia, maybe America.

He will never leave Cambodia.

Sovann is a seller.  Some days it is water, some days it is postcards, some days it is books with titles like “First They Killed My Father,” “The Khmer Rouge,” and “Pol Pot.”  The visitors are fascinated by the scars of his country’s past so he sells them scars.  Today Mister wants him to sell bracelets.  A metal hanger slung over his narrow shoulder displays the brightly colored bands.  Mister does not want him to return until they are gone.  It is the wet season, the visitors are not coming, Sovann knows that Mister knows this and knows that he does not care.

Serendipity Beach is where he will start.  The visitors will go there as long as the clouds stay away, the visitors are afraid of the wet.  Serendipity is the best and the worst place to be a seller.  It has many visitors, but also many sellers.  Spider Boy, Sarene, Nhean, all of the Sihanoukville sellers will be there.  Some of the sellers work for Mister, some work for other Misters.  They are all the same Sovann thinks, just like the things that they sell.

It is early and Serendipity is nearly empty.  The older boys have jobs hustling visitors into the bars and restaurants lining Serendipity’s narrow white sands.  Sometimes the older boys get tips.  Tips are free money.  Sovann does not understand this.  They are already getting paid to hustle and deliver.  They do not need more money, but they get it.  Free tip money.  Some of the older boys used to be sellers, but they got out.  They are the lucky ones.

Sovann sits on a bar stool at Dolphin.  He knows the owner, and knows he will not be chased off for pestering the visitors.  An older man, a visitor, is walking down the beach alone.  He is tall and stooped and his hairy skin is white and blotchy.  He is the type of visitor that stays under a cabana, in love with the beach but scared of the Cambodian sun.  Sovann wonders where he is from, maybe England, population 51 million, capital city London.  An older boy runs past him to intercept the visitor.  He motions the man inside, points at the signboard offering 50 cent beers and BBQ specials.  The visitor looks hesitant but relents and takes a seat beneath a cabana.  Sovann wants to jump up.  He wants to engage the visitor, sell him a bracelet, lighten the circular burdens coiled around his hanger.  But he knows better. If he approaches too soon the man will leave.  He has to wait for him to order.  He will not leave if he has a reason to stay.

The visitor orders a beer and sips it lightly.  Sovann approaches all smiles and confidence, “Good morning sir, want to buy a bracelet?”  The visitor ignores him, staring out at the calm blue seas.  “What’s your name?” asks Sovann.

“Oliiiver, where are you from?”

Sovann does not know this place, “Ah you look like you are from England or maybe Australia.”

Looking impatient the visitor says, “No.  Listen I am not going to buy anything, okay?”

Sovann sits quietly by the visitor’s side.  He does not think this visitor will buy, but it is too soon to walk away. Sovann tries again, “Later?”

Frustrated the visitor replies, “I just want to drink my beer.  No bracelet.”

Sovann knows this is the end of sell but he offers a final volley, “Cambodia has good beer, also good bracelets, look I have many.”  The man gives Sovann a creased-faced look.  Sovann smiles and casually walks away.  He decides he will ask the man again if he sees him later.  He will remember his name and the place where he is from, the place he does not know.

Sovann has walked the length of Serendipity twice and has sold only a handful of bracelets.  The visitors have pockets filled with big money.  They pay with stacks of green American dollars, but they cannot part with even a few thousand Cambodian Riel to buy a bracelet.  Sovann wonders if the visitors have sellers in their countries, he wonders if they ignore them too.

Sovann notices Sarene and her sisters talking to visitors, a man and his wife.  Sarene works for a different Mister.  She is also selling bracelets.  He has known her his whole life, they are the same age.  Sarene is a good seller.  Sovann sits on a near by beach chair and listens, Sarene is asking the man how old he is.

“How old do you think I am” the visitor responds.  “Twenty five,” says Sarene, purposely aiming low.

“Quite a bit older than that, I am thirty four.”

“It is because you smile a lot," Sarene says.  "Smiling means you are happy.  It means that you don’t think too much.  Too much thinking makes you old.”

The visitor’s wife looks at Sarene softly and tugs on her husband’s shirt sleeve.  He gives her a knowing glance, “Alright, we’ll buy one, can you make one with my wife’s name in it?”

Sovann shakes his head as he lifts himself off the chair, that was good he thinks to himself, I will have to remember that.

Sovann notices a group of young visitors drinking and laughing in a near by cabana, he approaches and jingles the hanger in front of them to get their attention.  One of the visitors, a man, says “No, no, we’re good.”

“Where are you from?” Sovann replies.

The visitor laughs, “you’re just full of facts aren’t you?”

Sovann likes this kind of visitor.  Selling is fun when the visitors are friendly and fun to speak English with.  “You want to buy a bracelet?  Maybe one for your girlfriend?” says Sovann.

“I don’t have a girlfriend,” the visitor replies.

“Buy a bracelet and maybe you’ll get one,” says Sovann.

The visitor laughs, “I think you’ve got that backwards little man.  What’s your name?”

“How does a guy named Mr. Handsome not have a girlfriend?” the visitor replies.

Sovann breaks into a smile, he likes this visitor, “Lot of girls just no girlfriend.  Which bracelet do you want to buy?”

“Nothing for me” says the visitor.

The visitor looks confused until Sovann points to a ragged pool table in the corner of the cabana bar.  “What’s the catch?” asks the visitor.  “We play for a deal,” says Sovann.  “If you win you get a bracelet for free.  If I win you have to buy one.”  “That’s fair” says the visitor.  “But, I have to warn you, I’m pretty good.”  “Okay man, we play,” says Sovann.  Sovann knows this pool table with its ripped and folded felt and its leftward lean.  He plays here often, he will not lose this game.  Sovann beats the visitor with three balls still on the table.  The visitor pays him three American dollars for a wood-bead bracelet.  He would have taken one dollar if the visitor had negotiated. 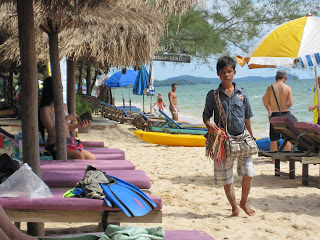 Happy with his sell, Sovann steps lightly towards the next group of visitors, but stops short when he hears the ominous clap of thunder.  The skies open up.  The wet has arrived.  Visitors leap off their chairs and run for their hotels.  The visitors cannot go near the wet.  They will hide in their rooms waiting for the sun to tell them it is safe.  Sovann walks up the rocky muddy path leading away from Serendipity Beach.  The day was starting to look up.  He kicks a rock aside, frustrated by the wet, frustrated by his still full hanger.  Mister will not be happy.