The most popular English language song in the Kingdom of Thailand is John Denver’s Country Roads.  That’s right ladies and gentlemen John “that dude from The Muppets Christmas” Denver is a great big shining star here. 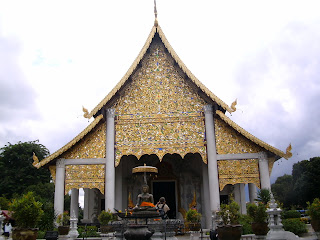 That said, his syrupy West Virginia ditty is somewhat fitting given that I am now deep in the Thai countryside in the Northern City of Chiang Mai.  Chiang Mai is the second largest city in Thailand but couldn’t be further removed form the urban overload that is Bangkok.  It feels like an artist commune tucked away in the peace and quiet of a mountain town.  The old city is surrounded by an ancient crumbling wall and a moat.  Inside the old city mopeds weave down narrow streets lined with quaint tourist shops¸ restaurants, bars and a variety of temples that range for understated and peaceful to ancient and mystical.

I spent the day traversing the old city with friends from my hostel.  We rented bicycles and pedaled from temple to temple laughing, joking and learning.  Chiang Mai is surrounded by lush green mountains covered in an ever present shroud of mist.  For the most part the clouds keep the heat at bay, but occasionally the sun breaks through and when it does it is ANGRY.  It throws haymaker rays that sear into your skin until you fold and duck behind any structure large enough to cast a sliver of shade. 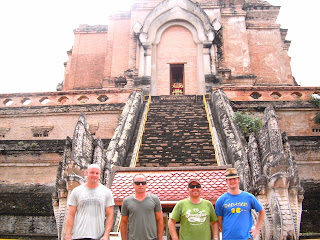 One of the greatest aspects of travel is the variety of people you meet.  Here at the Spicy Thai hostel the roster includes:

Paul: An Irishman from Belfast, Paul is funny, outgoing, fond of beer and quick to tell stories of trouble and mayhem that rival the best I’ve heard.

English Andrew:  A big English bloke Andrew is quiet, quick to laugh and funnier with each passing beer.

Australian Andrew:  He starts slow and but quickly steps on the gas.  Initially reluctant to join the bike crusade Andrew was soon hitching rides off taxis "Back to the Future" style and leading the charge for the nights activities. 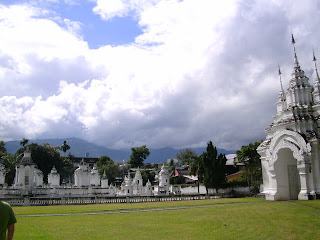 Tonight I'm going to eat Thai BBQ and hit the town with the Spicy Thai crew.