Yesterday morning I woke up well rested and inspired. I spent 9usd on a jump rope, which I was supposed to use daily and so far hadn't unpacked.  It was time. I headed out to a small park a few blocks from my hostel that overlooked the spires of the Petronas towers. The monsoon rains had hit the night before so the humidity and heat were still climbing back to their feet. 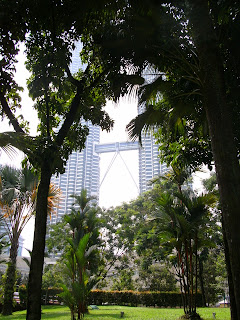 With jump rope whirring over head and under feet I began to shake off the morning rust and noticed that hundreds of people in full Muslim regalia were gathering on the sidewalks and in the very park where I was working out. The crowds were joyous, laughing amongst friends and posing for pictures with family. I had forgotten that it was a Muslim high holiday. An unfortunate faux paux really, because now a lovely local family will forever be burdened by the question, "who is that crazy ass white boy jumping rope in the background of our holiday photo?"

Later I met up with my friend Khai who is in KL for a few days before traveling to Australia where he plans to either bartend to make quick travel cash or pick fruit to kill time.  We stopped for dinner at a food court in Chinatown. We were the only Westeners in the place so we were treated to a musical selection of traditional Malaysian artists including, John Denver, Garth Brooks and Johnny Cash, "It was down in Louisiana just about a mile from Texarkana, in them old cotton fields back home." Doing as backpackers do we smuggled in a bottle of high octane Malaysian whisky to accompany our delicious clay pot chicken rice. Naturally this put us on to the path to excellent decision making. We met up with some new friends from the hostel and dived head long into the night. The rest of the evening can best be decribed as... 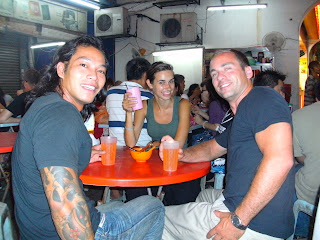 Drink several glasses of Malaysian whisky and reread that. I promise it will be brilliant, charming and every bit as funny as it believes itself to be.

Today I decided to visit the Batu caves just outside of the city. I boarded the #11 bus; capacity 45, occupancy 72. Forty minutes and an awkward spooning session with a small Indian man later I arrived. The caves are truly beautiful. 300 steps up the side of a limestone cliff they open up in a wonder of cathedral light, darkened corners, dampness, depth and height. The word "caves" does not do them justice, they are the great open space where the mountain breathes. The caves beauty and remoteness made them an ideal location for a hindu temple. In both Hinduism and Bhuddism sacrifice is an important aspect of worship. And in South East Asia "sacrifice" often means climbing, and steps, a lot of steps. Who needs a jumprope? Just worship. 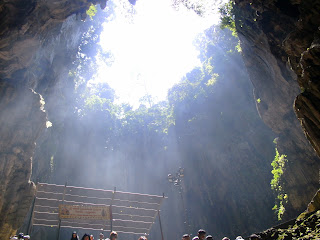