A village woman wearing sandals and a sarong scampers up a tree deep in the mountains surrounding Chiang Mai.

Jim: (Thick Scottish accent) What’s she doing in that tree?

Jim: What kind of vegetable?

Maxi: Has funny name.  In Thai we call Phuk.  Phuk Tong.  Is like a Pumpkin.

I am writing this blog from a tree house hostel in Vang Vieng, Laos (one of South East Asia’s most notorious party destinations) surrounded by travelers from around the world drinking a big Beer Laos.  Before I get pulled into international shenanigans I want let everyone know about the great Phuk’in time I had trekking in the mountains surrounding Chiang Mai, Thailand.

The trek was two days, one night.  The cast of characters included:

Jim: The Scotsman with a penchant for phrasings too Scottish too be real, “This backpack is hot shit!  It’s got all the proper dangly bits!”

Sarah and Zoey: Pretty, attached at the hip English girls nearing the end of their trip, they kept up with the boy’s step-for-step in trekking and in humor.

Aussie Andrew: Luckless in trekking but deadly funny throughout. 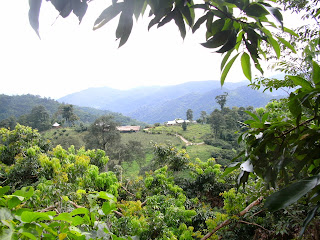 Robert and Manon: A Dutch couple that fit in seamlessly.

The trek began with a bumpy ride in a bench lined pick-up truck to the base of the mountains.  We stopped at an elephant sanctuary for activity number one.  Sarah, Zoey and I climbed on the smallest of the elephants.  The runt.  The massive runt.  Our “driver” was a wild man with stampede in his eyes and a cackle in his laugh.  I am convinced that the opium he pretended to smoke mid-ride was no so pretend.

The elephant in front of us was the “naughty” one.  At one point we were sure it was going to buck Paul, Andrew and Jim into the river.  The look on Paul’s face was classic, “Is this happening?  Oh, oh sh—it’s definitely happening.  Hang on!” 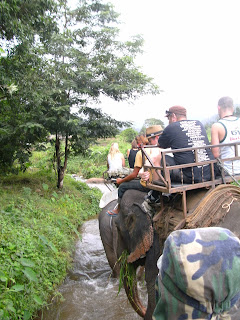 Midway through our driver jumped off the elephant never to return leaving Zoey in charge off driving.  She did an admirable job of steering the beast with a mixture of gentle prodding, sweet talk, and stern words.

Activity number two was a long trek to a remote village at the top of the mist and heat shrouded mountains.  Given that the trek was a common tourist activity we expected a leisurely stroll through the jungle….not so much.  The trail was no more than a foot wide and tangled with the ambitious growth of the monsoon rains.  We traversed steep ravines and wide rivulets, climbed boulders and ducked beneath massive branches.

Shoes were an issue.  Andrew’s sneakers were essentially size 10 slip-and-slides.  Every time we came to a muddy ravine he would despair, “Oh mate.  Mate.  I am f----ed!  Literally f----ed!"  Sarah faired better with stability, but thanks to a blister on her heel was forced to trek and climb with her heel out and Snoopy socks in ruins. 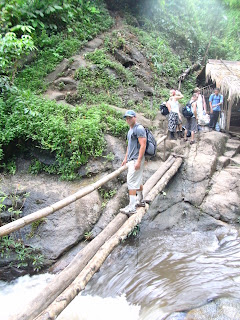 The heat on day one was stifling, the jungle canopy was no match for the humidity and sun’s agile rays, but the sweat and toil were worth every step.  The mountains were lush and humming and exotic.  At the end of narrow rolling path we arrived at a frothing waterfall and river pool.  Stripping out of our sweat drenched clothes we splashed feet first into the greatest swim of my life.

The waterfall had carved out a natural slide down the side of the rock face.  After watching two local village kids ascend the waterfall and slip down the slide we were emboldened to try.  Paul stepped up first.  Midway up he hit an impasse; couldn't climb any higher, couldn't climb back down.  He decided on the only thing he could, step sideways into the falls and let the current carry him to safety.  Unlike the kids we were old enough to have a minor sense of our own mortality and opted against any further attempts.

And then there was Andrew…poor poor Andrew.  There was a small thatch roofed, bamboo hut beside the falls.  After the swim he walked boldly into the hut to change and promptly crashed waste deep through the floor.  It was a scene straight out of a Charlie Chaplin movie.  We paused, waited for the signal that he was okay, which came in the form of a “Mate (sigh) I’m alright” and dropped and splashed into fits of laughter. 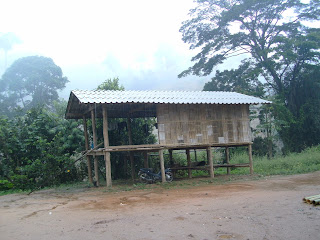 We spent the evening in a small remote village of bamboo huts, PVC pipe showers in cements sheds next to squat toilets and roaming animals including pigs that noisily made there presence known beneath the floor on which we slept.

The heat of the previous day was replaced by a persistent downpour.  Knowing that his slip-and-slide shoes would be the ruin of him, Andrew talked one of the villagers into selling him a pair of rubber boots, “Mate I am f----ed…these shoes…Mate, I can’t.  I will literally buy those boots.  Maxi, ask them if I can buy those boots….ask if they have them in blue!”

The path through the jungle was crumbling into a maze of rivulets and seep holes under the pressure of the monsoon; the rain of course had no sympathy.  Within a half an hour I was hiking with an extra 30lbs of wet; everything was bulk and squish and dripping stretch.  Maxi was undeterred by the falling rains.  He showed us a cave that was once used to hide treasure during conflicts with Burma, picked wild chili peppers and mint to sample, and showed us how to blow bubbles out of a local plant.

The final activity of the trek was a white water rafting excursion down the rain excited waters of the Mekong river.  It was a brief but fun ride.  Halfway through we had to pull the boats out of the river and drive past a rough section of the river.  We wanted to push through but Maxi explained, “Is very dangerous, I almost die, underwater, could not see, breathe.”  Thanks Maxi, a simple “too dangerous” would have been just fine.

Another bumpy pick-up truck ride home we returned exhausted, wet, several unwashable pairs of socks down, happy and fond of all of our trekking mates.

Tales of tubing to come…
Posted by MBabroad at 12:18 PM